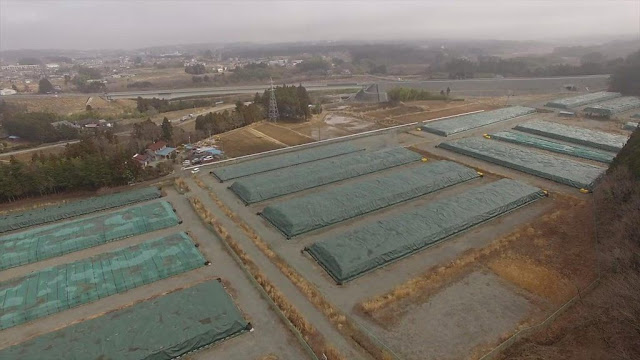 Less than a week after being hit by the worst typhoon in decades, Japan was bracing on Thursday for a secondary disaster. Heavy rain was forecast to hit already-inundated areas in the coming days. Officials said additional precipitation could destabilize storm walls along swollen rivers and trigger more landslides, with recovery efforts barely underway and a full picture of the devastation wrought by Typhoon Hagibis just starting to emerge.

The Ministry of Land, Infrastructure, Transport, and Tourism said more than 56,000 acres across eastern and northeastern parts of Japan's main island of Honshu were flooded by the super typhoon. More than 100 river embankments collapsed during and immediately after the storm struck last weekend, causing 33,000 homes to flood. Almost 2,000 houses were partially or totally destroyed. More than 77 deaths have been blamed on the storm, and hopes were fading fast that any of the approximately 10 people still listed as missing would be found alive. Thousands remained in shelters on Thursday, often shivering through the night as temperatures drop. Prime Minister Shinzo Abe met residents in Fukushima Prefecture, where the Abukuma River burst its banks and left the highest regional death toll from the disaster.

The government has allotted $6.5 million for its emergency response and may augment that with extra funds for reconstruction. More than 30,000 members of Japan's Self-Defense Forces have been called up to assist search and rescue efforts. In the city of Koriyama, in Fukushima, residents have gathered in shelters including the gym floor of the Takase elementary school. Futons for 98 people are folded neatly beneath the basketball hoops. The laborious job of removing mud from homes and businesses started early in the morning on Thursday, as heavy digging equipment was used in a race to restore storm walls and roads. In the Yanagawa area, a construction worker told CBS News' partner network TBS he was "extremely worried. We've got to work as quickly as possible." Then there's the mess left behind; the Environment Ministry said it expected millions of tons of ruined appliances, cars, plastic bottles, and other waste and debris to pile up from the 11 prefectures hit by the typhoon, which will take years to dispose of.

The government is considering asking countries outside the disaster area to accept some of the garbage in order to speed up the disposal. In Marumori, Miyagi Prefecture, near the Fukushima area where the flood water reached as high as 75 feet, (23 metres) and mudslides hit 150 locations, search and rescue efforts were being hampered by broken roadways. Earth-moving vehicles haven't been able to get in and remove debris in some remote hamlets accessible only by narrow roads.

According to Asahi Shimbun a popular Japanese Daily, the temporary storage facility containing some 2,667 bags stuffed with radioactive contaminants from the 2011 Fukushima Daiichi nuclear disaster was unexpectedly inundated by floodwaters brought by Typhoon Hagibis. Torrential rain flooded the storage facility and released the bags into a stream 100 meters away which flows into a main estuary. Officials from Tamara City in Fukushima Prefecture said that each bag is approximately one cubic meter in size. Authorities were only able to recover six of the bags by 9 p.m. on Oct. 12, and it is uncertain how many remain on the loose while the possible environmental impact is being assessed.

The Japanese Environmental Ministry has not said how many bags are missing but it has played down the threat. A statement to Kyodo News said: “The concentration of radioactive materials is relatively low and has little impact on the environment.”