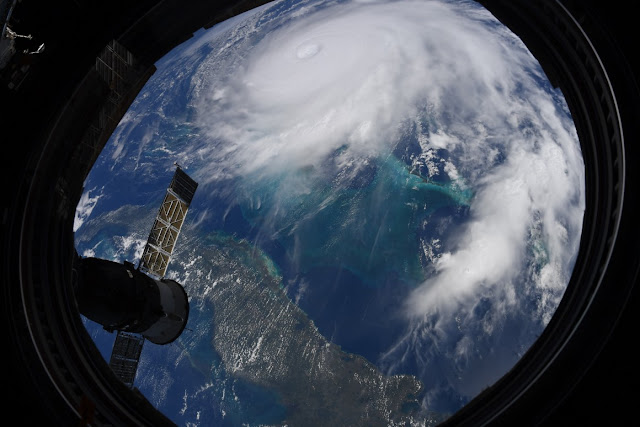 Incredible images of Hurricane Dorian from the ISS, credit NASA

Hurricanes are a force of nature with the potential to cause serious accidents and maritime injury for those who work in international shipping.  International shipping includes import of international goods and export of domestic goods. Through this channel, billions of dollars worth of products are transported around the world. When hurricanes develop, however, shipping workers, coastal towns and ports all feel the impact.
Hurricanes interrupt normal shipping schedules, which can affect manufacturing, freight and retail.  These powerful storms have a direct impact on international shipping in that ships and crew members are more vulnerable to maritime injury during turbulent conditions. Coastal communities and ports are also directly impacted as winds increase, rainfalls and storm surge blows in.
How Hurricanes Impact Ships
When hurricanes cause rough seas, high winds and rain, ships may be diverted around the storm. Depending on the situation, sometimes ships are forced to wait it out in port. When ships travel in or around an area where there is a hurricane, the ship is at risk for damage. But ships are also at risk for certain damages if it remains in port during a storm.
Many ship captains say that the best place for a ship to be during a hurricane is at sea and as far away as possible. When ships are tied up in port, waves can cause the ship to hit against concrete and metal pilings. This can cause extensive damage to the ship and is a threat to crew members on board.
Not only can the ship be damaged, but if a ship comes loose at the port, it can become something of a floating wrecking ball. The ship could hit other boats, structures, bridges or dams and cause damage. Large ships used for international shipping can weigh in excess of 170,000 tons. That is a formidable opponent against docks and structures.
How Hurricanes Impact Ports
When hurricanes threaten landfall, coastal communities feel the brunt of the impact. Not only do these towns experience the devastation of the storm itself, but they also suffer economically.  Sometimes ports are completely shut down, and other times they operate with a reduced crew. When ports are shut down, crew members may not get paid what they are accustomed to, which can affect their families. Some port towns are so small that disruption can negatively impact the entire community.
Strong winds and flooding can cause damage that may render ports inaccessible until the area is cleaned up. This impacts trade, ground transportation and cleanup efforts. When hurricane Harvey hit the Texas coast on August 2017, the Port of Houston was shut down for more than a week. Imports scheduled to be delivered were delayed, which caused a headache in the midst of peak shipping season.
How Hurricanes Impact International Trade
Manufacturers and distributors rely on international shipping and logistics schedules to move product efficiently. When there are delays, not only is the freight currently being moved impacted, but the manufacturer or distributor may also experience a backlog of items. This can wreak havoc on international trade because it can delay outgoing merchandise, delay arrival and delay movement of the freight from sea to truck or rail.
Hurricanes also disrupt international shipping through online retailers, like Amazon. When hurricane Irma hit, Amazon had a hard time meeting promised delivery schedules, which impacted its customer service as well.
Hurricanes can further impact trade by interrupting the normal supply of petroleum and jet fuel, which impacts ground and air shipping around the world. Disruptions in petroleum and fuel supplies have wide-reaching impacts in coastal areas where fuel prices may skyrocket.
Shipping Industry Hurricane Precautions
Companies that ship freight generally take precautions during hurricane season. These include:

Before a Storm - If there is an adequate warning, shipping companies will work to move freight as quickly as possible before the storm hits. Ships will be quickly moved out of the area as well in an effort to prevent damage.
During a Storm - During a hurricane, freight does not move. Whether it is retail or disaster relief efforts, ships are urged to stay in place while the storm is active in the area.
After a Storm - After a hurricane, ships will be assessed to make sure they are seaworthy. Often, ships are used to transport supplies into affected areas. The ability to do this depends on the condition of the port.

Unfortunately, taking precautions does not guarantee that shipping will not be interrupted. Furthermore, hurricanes are unpredictable, and plans that are applicable may not be once the storm makes landfall.
The impact of hurricanes on international shipping is wide-reaching. Disruptions and delays can continue for months after the storm has moved on. The maritime industry often looks back at how previous storms have affected the industry in order to assess their preparedness and response. This is a helpful tool to increase preparedness, reduce the risk of injury, and help ensure that the economic impact of a hurricane is minimal.