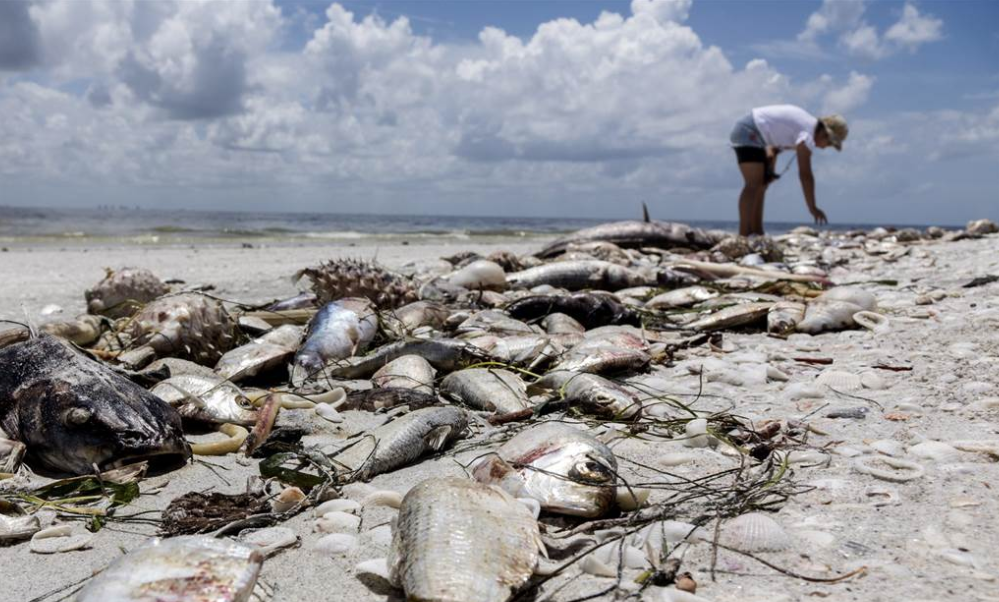 It was the unprecedented horror of 2018 for Florida's beaches when toxic algae killed thousands of tons of marine life and have returned.
Red tide is back in Manatee County shores - news that will be unwelcome by everyone.
A sample taken at the Coquina Beach South Boat ramp on Monday found very low levels of Karenia brevis, the algae that cause red tide, according to the Florida Fish and Wildlife Conservation Commission.
It's not the first patch of red tide detected on Florida's west coast this month.
Very low levels of Karenia brevis were detected off of Nokomis Beach last week.
It's also been recently detected in very low concentrations in Charlotte County and background concentrations in Lee County.
There have been no reports of fish kills or respiratory irritation, however.
Manatee County waters have been free from red tide for several months, but potentially toxic blue-green algae have been detected in waters near Anna Maria and in Palma Sola and Sarasota bays in the past week, according to the Florida Department of Environmental Protection.
None of the toxins the algae is capable of producing has been detected, however, but some testing is still pending.
Red tide hit Manatee County hard last year.
Starting in early August, it dumped hundreds of tons of dead fish and other marine animals on local beaches and in canals and other waterways.
It clouded the Gulf of Mexico and polluted the air, and hurt hotels and other tourist-related businesses.

"This was Florida's Deep Water Horizon!"
An incredible 408 marine life die-off's, almost one every day from July 2016 to November 2018 and is the biggest marine disaster in Florida's history.
Below are just some of the reports on the carnage the red tide algae caused...