"A very small swarm eats as much in one day as about 35,000 people!" After unprecedented flooding Iran is now under attack from locusts 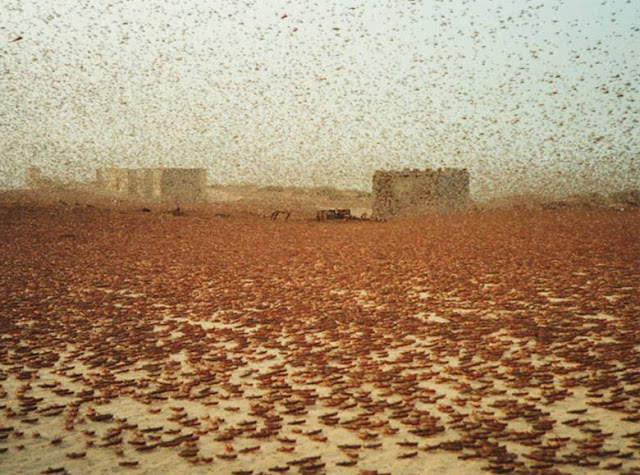 After unprecedented floods killed more than 80 people and damaged or destroyed 100,000 homes Iran is now bracing its self for swarms of locusts.
A locust outbreak in the Arabian Peninsula has been spreading to Iran, threatening crops and food security in large areas of the coastal province of Hormozgan, an official said.
Director of a department at Horkozgan's agricultural organization told Tasnim that Iran is facing the worst locust attack in the past 40 years.
He said several swarms of locusts have come from the Arabian peninsula to Iran over the last 10 weeks, some of which have penetrated into farmlands of the province as far as 200 kilometres from the coast.
The UN Food and Agriculture Organization (FAO) said in February that a locust outbreak in Sudan and Eritrea was spreading rapidly along both sides of the Red Sea to Saudi Arabia and Egypt.
The FAO also noted that good rains have allowed generations of locust breeding since October 2018, leading to a substantial increase in locust populations and the formation of highly mobile swarms. The UN agency had also highlighted the control measures in Iran after at least one swarm arrived on the southern coast at the end of January.
Adult locust swarms can fly up to 150 km a day with the wind and adult insects can consume roughly their own weight in fresh food per day.
A very small swarm eats as much in one day as about 35,000 people, posing a devastating threat to crops and food security.