A "SMALL" swarm can eat the same amount of food as 35,000 PEOPLE IN 1 DAY! UN alarmed at locust outbreak in northeast Africa and Saudi Arabia 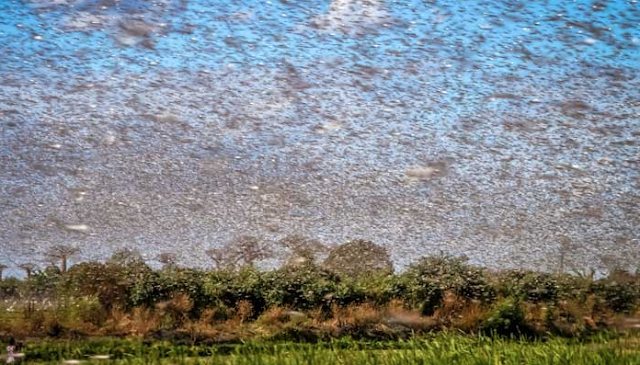 The Food and Agriculture Organization of the United Nations, (FAO) have sounded an alarm on a desert locust outbreak in northeast Africa and Saudi Arabia triggered by heavy rains.
Increased vigilance, strict monitoring and early control needed to prevent further swarms forming and spread along both sides of the Red Sea.
Heavy rains and cyclones have triggered a recent surge in Desert Locust populations, causing an outbreak to develop in Sudan and Eritrea that is rapidly spreading along both sides of the Red Sea to Saudi Arabia and Egypt, FAO warned today.
The UN agency called on all the affected countries to step up vigilance and control measures to contain the destructive infestations and protect crops from the world's most dangerous migratory pest.

Good rains along the Red Sea coastal plains in Eritrea and Sudan have allowed two generations of breeding since October, leading to a substantial increase in locust populations and the formation of highly mobile swarms. At least one swarm crossed the Red Sea to the northern coast of Saudi Arabia in mid-January, followed by additional migrations about one week later. Groups of mature winged adults and a few swarms also moved north along the coast to southeast Egypt at the end of the month.

In the interior of Saudi Arabia, two generations of breeding also occurred in the southeastern Empty Quarter region near the Yemen-Oman border after unusually good rains from cyclones Mekunu and Luban in May and October 2018 respectively. A few of these swarms have already reached the United Arab Emirates (UAE) and southern Iran with a potential risk of spreading further towards the India-Pakistan border.

Adult locust swarms can fly up to 150 km a day with the wind. Female locusts can lay 300 eggs within their lifetime while an adult insect can consume roughly its own weight in fresh food per day - about two grams every day. A very small swarm eats the same amount of food in one day as about 35,000 people and the devastating impact locusts can have on crops poses a major threat to food security, especially in already vulnerable areas.

In January, the holiest site in Islam was hit by a plague of locusts, forcing cleaners into action to drive the insects out.
Footage shared on social media showed the insects swarming around the Great Mosque in Mecca, which hosts millions of Muslim pilgrims every year.
Environment