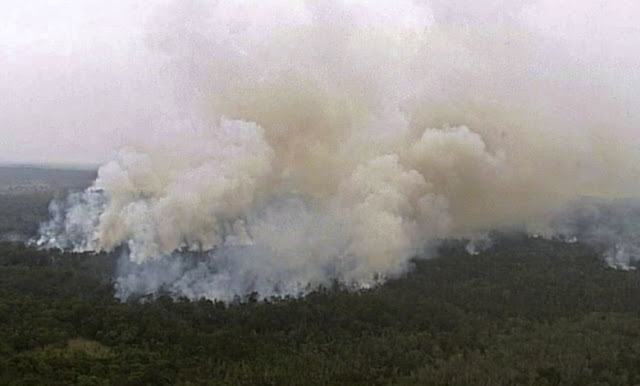 A monster inferno that has razed thousands of hectares of bush and farmland in central Queensland is becoming more powerful as a heatwave sweeps the state.
Exhausted crews have spent the night battling to get the upper hand as the fire continues to threaten communities between Bundaberg and Gladstone.
But authorities this morning warned the blaze had begun to re-intensify, with heavy smoke making it difficult for firefighters to bring it under control.
"It's so smoky out there we didn't get to see the whole fire, all we got to see was the section we were working on," water-bomber pilot John Gallaher told ABC radio.
"It's burning hot, (crews) have their hands full.
"It's going to take people on the ground to put these out.
Our role is essentially to slow the fire down for them."
A man in his 30s who had been fighting the fire was on Monday night took to Bundaberg Hospital in a stable condition with a heat-related illness.
Hundreds of people have been ordered to leave homes at Deepwater, Baffle Creek, Rules Beach, and Oyster Creek west towards Miriam Vale.
Residents of Round Hill, north of the national park, have also been told to prepare to flee.
High temperatures and erratic winds over the past few days have pushed the fire across 17,000 hectares and reportedly destroyed four homes.
Sheds and caravans have also been damaged.
Forecasters say conditions today won't be as bad.
However, severe heatwave conditions are expected on the fire ground from tomorrow, giving firefighters a narrow window to gain the upper hand.
The situation will be even worse in the north.
Extreme heat is expected there from tomorrow and would make it easy for any new fires to get away. Fire chief Katarina Carroll will be asking for more interstate support beyond the 100 NSW firefighters already deployed to the central Queensland bushfire.
"We don't have respite for a number of days - very hot and very dry and very difficult conditions for us," she told the ABC on Tuesday.
"Because the heat wave is across most of the state, I can't afford to release resources from other parts of the state."
Premier Annastacia Palaszczuk has urged people near the fire to follow orders, get out and stay out until the situation is safe.
Eight aircraft, including a massive water bombing plane which can dump 15,000 litres at a time are also working on the fire.