A "once in a lifetime weather system" of "gale force winds," cold temperatures-kills hundreds of turtles off Cape Cod Friday 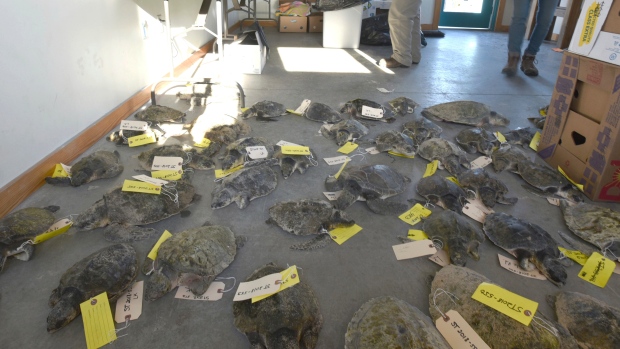 Photo credit ctvnews.ca
Close to 200 dead sea turtles, (though the true number is not known), were found frozen off the coast of Cape Cod Friday after low temperatures stifled their ability to make it safely to shore.
The Mass Audubon wildlife sanctuary said a "once in a lifetime weather system" of "gale force winds," cold temperatures and high tide caused the migrating turtles to become "incapacitated" by the time they were found along the Massachusetts peninsula around 6 a.m. ET Friday.
"A lot of the turtles were found frozen in the water still," Mass Audubon's director Bob Prescott told NBC News.
"I picked up two to three myself that were still in the water, the slushy water."
Prescott said that while the organization will help facilitate tests on the turtles to determine the exact cause of death, the turtles did "essentially freeze."
Overall, the Mass Audubon said they have found over 400 dead turtles this season.
According to researchers, the timing of the species' migration has only increased the chances of turtles getting frozen.
Back in 1990s, sea turtles used to arrive to the Cape Cod area in October but now, they have been coming to shore around November when the water is much colder.
"Sea turtles are moving further north along our coast, or south to the southern hemisphere, as waters are warming and they are expanding their ranges," said Wallace J. Nichols, a research associate at California Academy of Sciences and sea turtle biologist.
"So when we get these quick swings from warm to cooler, the turtles that haven't made it south definitely get into trouble."
Migration is a seasonal way of life for sea turtles - traveling thousands of miles to feed and lay their eggs, according to the U.S. National Oceanic and Atmospheric Administration.
Conservation efforts in recent years have helped to stabilize the sea turtle population and allowed them to make their way to locations they haven't visited in years, according to Nichols.
However, changing temperatures have made them unprepared for what is headed their way in those areas.
"Climate change is impacting sea turtles very clearly," Nichols said, adding that "cooked" turtle eggs caused by warmer waters has affected the animals' migration patterns both ways.
Since the discovery, Prescott said that water temperatures have gotten a "little warmer" allowing some turtles to make it to shore, and about a dozen turtles have been sent to the New England Aquarium.
Most of the turtles coming into the Cape Cod area this time of year are tropical or subtropical in nature, preferring water temperatures of 75-85 degrees Fahrenheit, Prescott said.
He added that they were unable to revive the turtles found Friday morning - some of which were the critically endangered species Kemp's Ridley sea turtle.
"The problem here is that they can't get out of Cape Cod Bay in time," Prescott said, adding that they still don't know how many turtles have been frozen to death in areas like Brewster, Massachusetts, where the beaches have been iced in.
"The shape of the bay just confuses them."