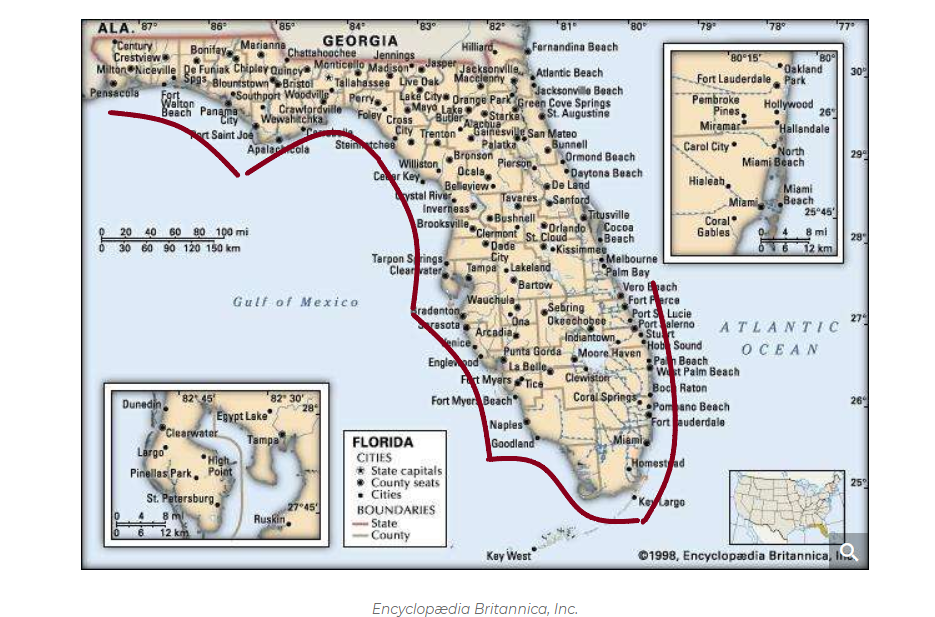 Above, red line showing the red tide algae bloom
Florida’s marine shoreline totals more than 8,400 miles but less than 200 miles of the Florida coast is free from an unprecedented red tide algae bloom.
The algae bloom now stretches from Pensacola on the Alabama border in the Gulf of Mexico all the way down the west coast around the southern tip and up the eastern coast to Sebastian.
The bloom has killed an astonishing amount of marine life as well as causing health issues to local residents and tourists.
Just a few hours after Sebastian Daily broke the news that Red Tide was seen in Vero Beach south of the Sebastian Inlet, Indian River County officials say they were working to "assess conditions." "There are indications that Red Tide has reached Indian River County and we are working closely with the Indian River County Department of Health to assess conditions," a statement reads from officials.
"There have been reports of sporadic dead fish and mild respiratory irritation.
There are no Indian River County beach closures at this time.
The Department of Health is collecting samples for both confirmation and the potential level of Red Tide based on the number of organisms present," the statement read.
While the Sebastian Inlet appeared to be fine early Monday, several people in Vero Beach contacted Sebastian Daily to report the existence of Red Tide on several beaches.
"We've been coughing all morning, and it's only been worse since we walked the beach this morning," a Vero Beach resident told Sebastian Daily.
Many people also questioned why the county never warned residents or didn't close the beaches. "Lifeguards at tracking station are wearing masks because it's so bad," Lifeguard Michael Flinn told Sebastian Daily.
The lifeguard tracking station is south of John's Island and 1 mile north of Jaycee Beach.
On Monday afternoon, Sebastian Daily investigated the beach south of John's Island, which appeared to show signs of red tide.
There were dead fish on the beach, the air made us cough, and we now have sore throats.
Sebastian Daily contacted the FWC Monday afternoon based on our observations along the beach just south of John's Island.
Local residents say it's Red Tide as they have experienced this in the past.
"It's definitely Red Tide, you can smell it, makes you cough," John Naft told Sebastian Daily.
"We've seen it before, I don't know, ten years ago, it was even worse than this," Naft added.
Towards late afternoon, there are indications that Red Tide is now in Sebastian.