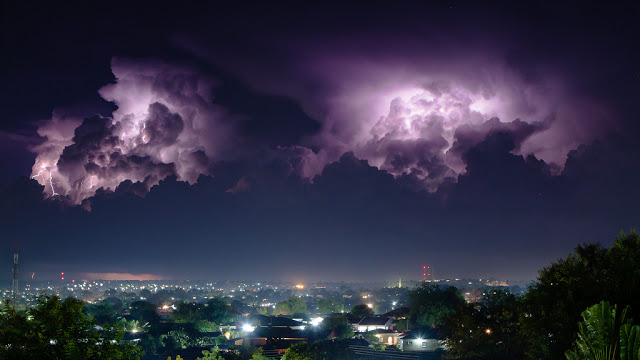 Bangladesh has seen a near-record number of deaths in the last two years from a phenomenon that appears to be worsening with climate change: lightning strikes.
So far this year hundreds of deaths have been reported in India and Pakistan from lightning strikes.
Most lightning deaths usually occur during the warm months of March to July.
India has seen a similar surge in lightning deaths with more than 300 deaths in May so far.
The problem has prompted Bangladesh’s government to add lightning strikes to the country’s list of official types of disasters, which includes floods, cyclones and storm surges, earthquakes, drought and riverbank erosion, among others.
More Heat, More Rain
Scientists say warmer conditions associated with climate change are causing more water evaporation from the land and ocean, increasing clouds and rainfall and the potential for lightning storms.
“The months of April, May and June are the hottest in Bangladesh and the moist air quickly rises upward to meet with dry north-westerly winds to cool and form large storm clouds,” Dipen Bhattacharya, a physics and astronomy professor at Moreno Valley College in California, told the Thomson Reuters Foundation.
“Some specialists think that as the world warms up, we should expect more explosive lightning events rather than a gradual increase,” he said.
Altogether, around 2,000 people have died from lightning in Bangladesh since 2010, Bangladesh Meteorological Department data shows.
According to a 2014 University of Berkeley study, lightning strikes are expected to increase by 12 percent for every degree Celsius of warming, with a 50 percent rise in lightning expected by the end of the century.
According to Bangladesh’s Met Office, prior to 1981, the country saw lightning strikes on average nine days each May.
Since that time, the country has seen strikes an average of 12 days each May.
In Europe, lightning strikes are on the increase at least 322 wild reindeer killed by lightning in Norway in 2016 the Scandinavian country has seen a massive increase in death by lightning in recent years.
In June 2016, more than a 100 people were struck by lightning in Germany France and the UK over one weekend.
Last July The Met Office claimed the storm above Cornwall on Wednesday morning produced almost 150,000 lightning strikes in a two hour period which is by far unprecedented and smashes the old world record by a country mile.
The old record was a mere ten thousand lightning flashes which lit up Hong Kong's night sky over the weekend (Jul 9-10-16) during a thunderstorm that lasted for twelve hours.
It reportedly surpassed the July 2005 24-hour record of 9966 strikes.
However, the Post reported that because the strikes spanned over two days, they might not go down in the record books full story here.
Just last weekend the UK suffered around 60,000 lightning strikes recorded in four hours on Saturday night, the BBC Weather channel said.
BBC Weather presenter Tomasz Schafernaker called it the "mother of all thunderstorms" as he watched it over London.
"Oh boy! This [is] utterly insane," he said.
"I've never seen a storm with such frequent lightning in my life I don't think.

A recent rare phenomenon “ thunderstorm asthma” which struck Melbourne last summer claimed a 6 lives, with 3 others in a serious condition in hospital.
Around 10,000 people have been treated in hospital.
At the peak of the storm Ambulance Victoria was flooded with more than 1900 calls in a five hour period – more than six times their usual workload, Ambulance Victoria ran out of ambulances and had to call in police officers, firefighters, non-emergency patient vehicles and field doctors trained for disasters to help with transporting acutely ill patients to hospital.
The huge numbers of casualties brought the hospitals to a breaking point.


Some victims said they blacked out and woke up in hospital.