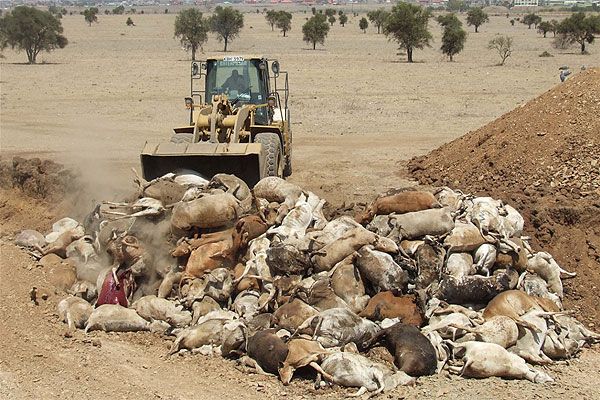 Photo credit treehugger.com
Joshua Otieno, a farmer in Nyakach, Kisumu County, watched in disbelief as his cows collapsed and died one after the other.
By midday, Tuesday, more than 150 cows, including some that belonged to his neighbours in Rangul village, lay dead under unknown circumstances.
An entire village is now counting losses and coming to terms with the biggest catastrophe in the area in recent times.
The cows reportedly developed difficulties walking before dropping dead as their owners watched, moments after leaving a grazing field.
According to the owners, the deaths began on Monday evening.
By the time of going to press, at least 36 homes had been affected, with more than 75 animals reported dead in Asawo location, and 70 others in the neighbouring Rang'ol location.
Mr Otieno said he lost 14 of his 24 cows.
The cause of death remained unknown, although there were unconfirmed reports that the cows could have fed on grass from a farm that had been sprayed with a chemical.
"We are shocked.
We have used the same grazing field since time immemorial and we have never witnessed such an incident," said Otieno.
He said he discovered his cows had a problem at 10pm when he went to the cowshed to respond to a strange noise from the cattle.
"As I moved closer to the cowshed, one cow had already dropped to the ground.
Before long another one dropped.
We tried to save them but it was not possible.
Within 30 minutes, 10 cows had died," said Otieno.
The dying and dead animals had white foam oozing from the mouth and a watery substance from the anus.
At least 50 metres away, Samson Odhiambo watched 19 of his 36 cows die.
Mr Odhiambo's ordeal was the same as Otieno's, and also began slightly after 10pm.
When he sought help from his neighbours, he found some of them facing the same problem.
"It was a case of one cow collapsing after another, and I counted them as they died.
It is sad because this is my only source of livelihood," said Odhiambo.
James Ouma lost seven of his 16 cows and discovered the carcasses yesterday morning.
Area Member of the County Assembly Rashid Miruka called on the relevant authorities to investigate the incident.
Agriculture and Livestock Executive Gilchrist Okuom said his office had already responded to the matter.
Kisumu Director of Special Programmes Ruth Odinga said they had sent an excavator to help bury the cows.
In Nyakach, police were keeping vigil to keep residents away from the carcasses.