Continued "climate instability" 60,000 people affected by Argentina's deadly floods in the north: At least 600,000 hectares destroyed by fire in the east 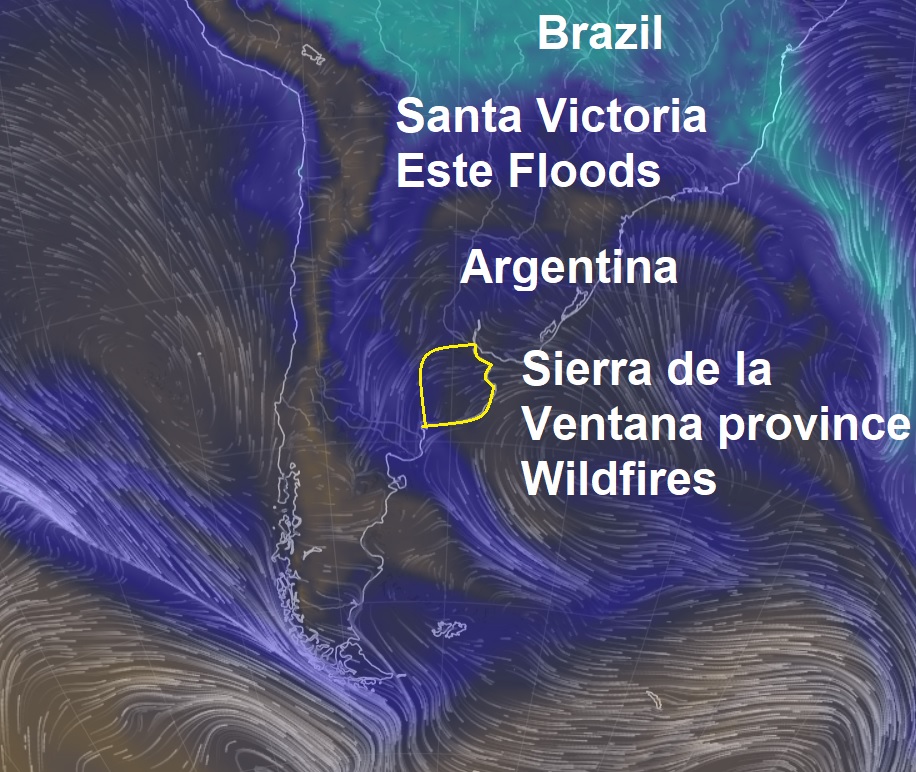 Earthwindmap
At least 10,000 residents in northern Argentina forced to evacuate their homes.
More than 60,000 people have been affected by Argentina's ongoing deluge, with at least 10,000 in the north forced to evacuate their homes, the Argentine Red Cross reports.
"So far there are more than 60,000 affected; the most complicated situation is in Santa Victoria Este, where 10,000 people have been evacuated and hundreds of families are isolated and without communication," said Cristian Bolado, director of response to emergencies and disasters of the Argentine Red Cross.
The Red Cross is predicting continued "climate instability" throughout the remainder of the weekend in Chaco, Tucuman and Formosa, with Salta falling under "critical watch."
Secretary of Public Service of Tartagal Miguel Parra said: "The men and women are receiving all our support and solidarity; all of our emergency teams are at their disposal.
We have a lot of experience in this when the avalanche occurred in 2009, so we have to turn it towards these people."
More than 40 commercial buses and several helicopters have been sent to various regions to aid evacuating families.
By the Pilcomayo River, a permanent emergency team has been commissioned to help residents living in coastal regions move to more secure locations.
So far only one fatality has been reported: a 28-year-old woman died on Wednesday when her home was swept away in a landslide in Salvador Mazza.
Four children narrowly escaped when 32-year-old Miguel Angel Gimenez jumped into the Colorado River to save the family being carried away by the torrent.
While landslides, waterlogging and serious damage to highways and a gas pipeline plague the north, fires are tearing through the east in Sierra de la Ventana province.
More than 200 firefighters are battling flames whipping across 10,000 hectares of stubble and pasture. At least 600,000 hectares have already been lost.