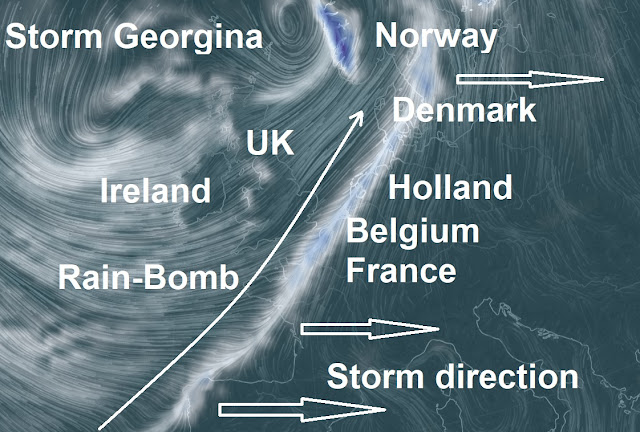 Earthwindmap
It's the seventh named storm of the winter, Storm Georgina, named by Met Éireann (Irish Met Office) has made landfall along the whole of the western coast of Europe after smashing into the UK and Ireland with gale-force winds, with another storm following offshore in the great North Atlantic storm factory.
Georgina the latest in a line of massive depressions rolling in from the Atlantic raged across Ireland, Scotland and England with 90mph winds and flooding from the torrential rain.
Extraordinary warm temperatures where also prevalent as the storm sucked warm moisture from North Africa all the way up to Scandinavia, Exeter recorded 14.6C (58F) which is the warmest January temperature in the UK for two years, a similar temperature was also recorded here in Holland today.
As the weather bomb passes temperatures are set to drop under nil again tomorrow across the UK.
The storm is expected to head out east towards Germany later tonight.
By the 28th of January, the next storm will arrive and will be an almost exact copy of Georgina, see below. 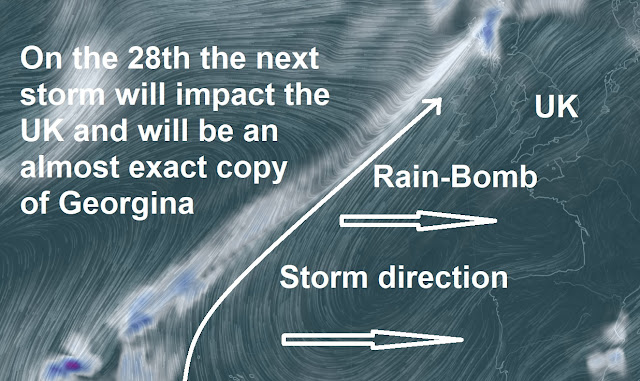