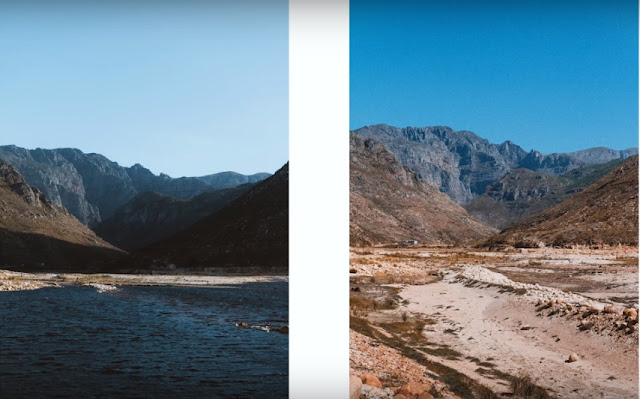 Before after shot of water crisis in Cape Town  screen shot from visualrev video, see below.
With just 88 days of water left before Zero-Day, frustration is breaking out among residents who are queueing at springs to fill up containers.
With panic beginning to set in amongst Capetonians over the water crisis, citizens are showing their frustration by screaming and shouting as they queue up for water, with officials fearing their fear will lead into all-out anarchy as the crisis reaches its climax, Zero-Day, when Cape town will to be the first major city in the world to run out of water.
According to Cape Times, Cape Town has ramped up water restrictions which come into effect from 1 February.
Residents will be allowed to use 50 litres per person per day - about two-and-a-half standard buckets - down from the current 87 litres allowed.
This, as the city, continues to struggle with a three-year-long drought due to a lack of rains that traditionally filled catchment areas.
According to Reuters, water levels at dams that supply South Africa’s Cape Town fell further this week, data showed on Wednesday.
Dam levels in South Africa’s Western Cape province fell to 25.3 percent on Monday from 26.6 percent the previous week, and from nearly 40 percent a year ago, according to data from the department of water affairs.
The water crisis poses a risk to a vibrant tourist industry that sees almost 2 million visitors flock to Cape Town every year.
South Africa's bustling city of Cape Town, is home to nearly 4 million people will be allowed just two-and-a-half buckets of water per person per day from February the 1st
The drought has a devastating effect on South Africa wine harvest which is the 7th biggest in the world.