Almost 100 after-shocks have rocked Kodiak Island since the mag 7.9 quake yesterday! Millions got lucky along US and Canada coast once again 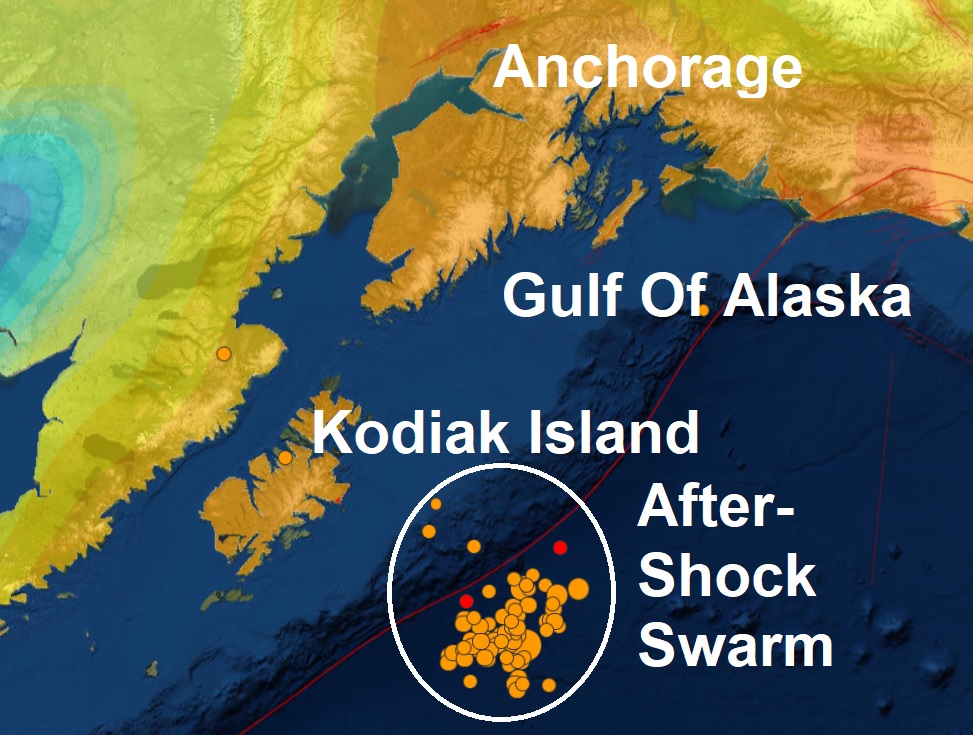 After-shocks are now rattling the Kodiak Island area, nearly 100 after-shocks have now occurred south east of Kodiak Island since the original mag 7.9 quake rocked the area yesterday. 85 after-shocks have now been recorded with the biggest being a mag 5.7 quake just two hours after the original.
It appears now millions of people from Alaska to California rode their luck once again yesterday along the US Canadian West coast as the actual depth of the powerful was not susceptible to a massive tsunami
As we saw with the mag 9.0 earthquake in Honshu Japan in 2011 after-shocks can be just as damaging as the original quake, the Honshu quake which brought down the Fukushima nuclear plant suffered more than 70 aftershocks over the mag 6, with many in the mid mag 7's.

According to ADN, No injuries or damage was reported in Alaska coastal cities after the 7.9 earthquake set off tsunami scare yesterday.

The magnitude 7.9 quake triggered evacuations along the Alaska coast from Sitka to Homer to Sand Point.
It jostled people awake in the middle of the night.
In at least 10 Alaska communities, the threat of a tsunami sent residents seeking higher ground as warning sirens wailed.
The earthquake was felt from Unalaska to Fairbanks and all the way to Vancouver, British Columbia, and Washington state.
Millions of people fell within the range of emergency alerts in the U.S. and Canada, from the Aleutians through British Columbia to California.

The 1964  an Alaskan earthquake, also known as the Great Alaskan earthquake and Good Friday earthquake, occurred at 5:36 PM AST on Good Friday, March 27.
Across south-central Alaska, ground fissures, collapsing structures, and tsunamis resulting from the earthquake caused about 139 deaths.
Lasting four minutes and thirty-eight seconds, the magnitude 9.2 megathrust earthquake was the most powerful recorded in North American history, and the second most powerful recorded in world history.
600 miles of fault ruptured at once, and moved up to 60 feet (about 500 years of stress buildup).
Soil liquefaction, fissures, landslides, and other ground failures caused major structural damage in several communities and much damage to property.
Anchorage sustained great destruction or damage to many inadequately earthquake engineered houses, buildings, and infrastructure (paved streets, sidewalks, water and sewer mains, electrical systems, and other man-made equipment), particularly in the several landslide zones along Knik Arm.
Two hundred miles southwest, some areas near Kodiak were permanently raised by 30 feet (9.1 m). Southeast of Anchorage, areas around the head of Turnagain Arm near Girdwood and Portage dropped as much as 8 feet (2.4 m), requiring reconstruction and fill to raise the Seward Highway above the new high tide mark. Full story Wikipedia
Home
at January 24, 2018