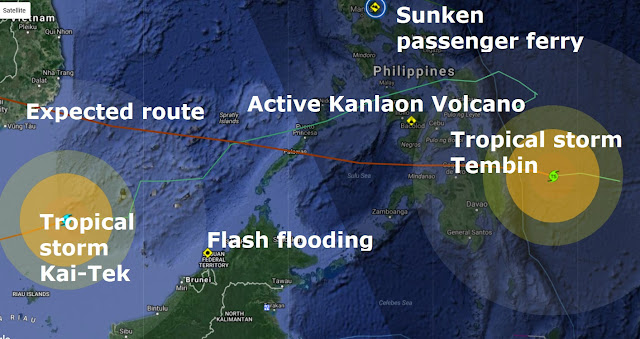 RSOE Alertmap
A passenger ferry with 251 people on board has sunk in choppy waters off the Philippines' eastern coast, causing an undetermined number of casualties.
At least 100 people have been rescued after the accident near the village of Dinahican in Quezon province, 74 kilometres east of Manila.
Many are thought to be missing.
Conditions have been poor in past days due to tropical storm Kai-Tak which left more than 40 people dead in landslides in the central Philippines.
Yet another tropical storm, "Tembin" is approaching the approaching the area with wind gusts of 85km/h.
More than 35,000 families or almost 160,000 people in Eastern Visayas and Caraga region were affected by Tropical Storm Kai-Tak or Urduja to the locals, the National Disaster Risk Reduction and Management Council (NDRRMC) reported Saturday.
The NDRRMC's situational report released around 8 a.m., said the affected population is composed of 35,021 families or 158,166 people in 322 barangays across the two regions.
Of this number, 8,831 families or 38,846 people are staying in evacuation centres.
The storm has also cut power supplies to thousands of people.
Kai-Tak has weakened to a tropical depression after barrelling through the eastern region of Visayas on Saturday, hitting islands and coastal towns such as Tacloban City where super typhoon Haiyan claimed 8,000 lives in 2013.
Locally known as Urduja, Kai-Tak was packing winds of 55 kilometres (31 miles) per hour with gusts of up to 80 km/h, according to a weather bureau bulletin.

Quake alert: Active Kanlaon Volcano in the Philippines which was shaken by up to 2,234 volcanic earthquakes in less than 48 hours last week, with a coronal hole on our Sun spewing solar wind towards Earth and new tropical storm Tembin set to batter the volcano's vicinity with severe winds and torrential rain in the coming days which, together, could very well signal a major quake or a volcanic eruption..Stay tuned.