Penrith Sydney records the highest December temps on record with a maximum of 44.1C on Tuesday as Australian mercury surges upwards. 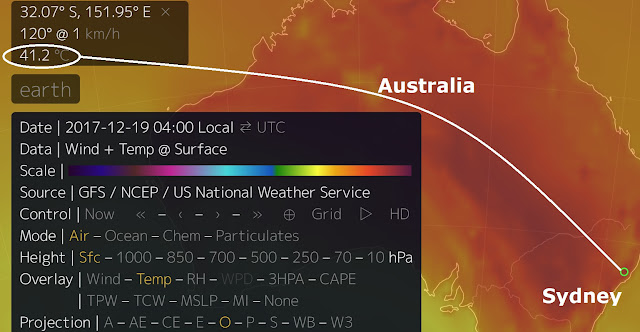 Earthwindmap
A golfer in his 60s has died after collapsing in the heat in Sydney's south, as the city swelters through tops of 40C.
Emergency services were called to the Woolooware Golf Club, in Sydney's south, after the man collapsed about 1 pm.
A spokesperson said the man later went into cardiac arrest and died at the scene.
Paramedics have urged residents to be sun smart, keep hydrated and take care as the mercury surges upwards.
"People need to understand heatstroke can be a killer and not to take their health for granted," Chief Superintendent Alan Morrison said.
"We really want the public to stay inside, drink water and avoid physical activity - this advice is especially important for elderly people.
"These kinds of conditions can have very serious health effects."
NSW is sweltering, with the mercury climbing to 40C in Western Sydney and 42C in Northern NSW. Paramedics have treated 55 people for heat, dizziness, fainting, and entrapment across NSW. Yesterday they treated about 70 heat-related incidents.
The Western suburbs are now suffering as the hot weather rolls in.
Badgerys Creek has reached 40.7C, Horsley Park has recorded a top of 40C, along with Penrith and Richmond.
In Williamtown, near Newcastle, the temperature soared to 42.9C.
Sky News Weather chief meteorologist Tom Saunders said parts of NSW were now up to day eight of a heatwave, which is defined as three or more days of above minimum and maximum temperatures. A cool change is expected to hit this afternoon, finally providing some relief.
"A trough and front moving east over eastern Australia separate a hot northerly from a cooler southerly," Mr Saunders said.
"The southerly change is already moving up the NSW south coast and dropped the temperature at Moruya 10C in just over an hour after 7 am."
He said the southerly will hit as a bluster and temperatures in coastal suburbs should see temperature drops from the 30s to the low 20s by late this afternoon.
"This follows a very warm night - the city's minimum stayed above 25C, the warmest night since last summer," Mr Saunders said.
"Penrith's maximum of 44.1C on Tuesday and minimum of 25.3C today are the highest for December on record - in 23 years of data." Mr Saunder said extreme weather experience in Victoria would impact on NSW.
"The trough and front will trigger storms across NSW today, although we do not expect the activity to be as widespread as it was in Victoria yesterday."
He said severe thunderstorms were still possible over central NSW today, which may include parts of Sydney.
The NSW RFS has issued total fire bans for the Greater Sydney Region, The Hunter Region and North Western NSW, with the three areas facing severe fire danger ratings.
"It's pretty hot and dry right around different parts of the state, but that's where the concentration of the worst weather is today," RFS Commissioner Shane Fitzsimmons told the Nine Network today. "We have got 30 fires that we still haven't got contained; we are dealing with more than 80 fires around NSW at the moment."
The heat has also prompted electricity provider Ausgrid to cancel planned maintenance outages on the Central Coast and Hunter Region for Wednesday.
Thursday will feel dramatically different with a top temperature in the city of 24C and 27C in the west while Friday will be equally mild with a top of 25C.
The mercury, however, is set to rise again for Christmas Eve with the west due to cop a top of 39C with 33C predicted for the coastal areas.
Christmas Day will be much milder, 28C in the west and 25C in the city.