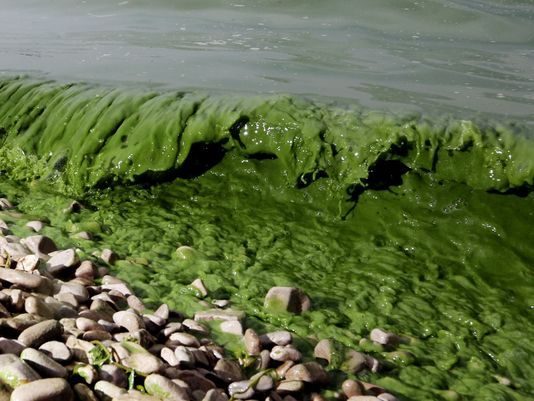 Potentially harmful algae bloom is covering more than 700 square miles in the western basin of Lake Erie, authorities say.
Algal blooms, which contain cyanobacteria, have become a common occurrence on the lake each summer, thanks to warm water temperatures and the extensive use of fertilizer on the region's farmland.
The National Oceanic and Atmospheric Administration released a statement Monday noting that the "microcystis cyanobacteria bloom continues in the western basin, extending alongshore the Michigan and Ohio coasts from Maumee Bay, past the islands to the Ontario coast."
The blooms are a concern because the cyanobacteria can produce toxins that contaminate drinking water and cause harm to the local ecosystem.
The city of Toledo noted on its website that microcystin is detected in Lake Erie but not in the city's tap water.
"Our water treatment process is effectively removing the microcystin," the city told its population of nearly 300,000.
"No action is required by consumers."
Earlier this summer, NOAA warned that the lake would experience a large bloom this summer, which prompted environmental groups to voice concern.
"Harmful and toxic algal blooms in western Lake Erie have contaminated drinking water, closed beaches, and hurt our fishing and tourism industries."
Charlotte Jameson, government affairs director for Michigan League of Conservation Voters, said. "NOAA's forecast reminds us that Lake Erie's algae problem has not gone away and that we can't just hope for dry springs as a solution.
Unfortunately, Michigan seems to be determined to do just that, missing every opportunity to craft a plan that stands a chance at bringing this Great Lake back to health."
While climate change plays a large role in the development of these blooms, environmentalists say that agriculture is the main culprit.
A report released by Environment America says that agriculture has polluted more than 145,000 miles of rivers and streams, 1 million acres of lakes and reservoirs, and 3,000 square miles of bays and estuaries to the point where they can't be used for swimming, fishing, drinking water or maintaining healthy wildlife.
The latest bloom, which has been sustained since July by warm water temperatures and nutrients from nearby farms, prompted Toledo Mayor Paula Hicks-Hudson to write a letter to President Donald Trump on Sept. 26, urging the federal government to declare Lake Erie impaired.
This would allow the lake to be monitored for nutrient runoff and regulated under the Clean Water Act, the Toledo Blade reported.
"There is something very wrong with our country when our rivers and lakes turn green," Ms Hicks-Hudson wrote in her letter.
"As I look out my office at a green river, I can tell you one thing:
The status quo is not working."
The mayor had previously refused to join the ranks of environmentalists demanding that the U.S. Environmental Protection Agency declared the western basin impaired but said on Sept. 26 that she could no longer stand by and do nothing.
"It is about the Clean Water Act but it is also about climate change.
It's about us really looking at what has really happened today ... I am going to do everything I really can to make a dent in this problem we are facing," she said.
A Lake Erie algal bloom in 2014 led to the Toledo water crisis that affected roughly 500,000 residents.
In 2016, algal blooms led Michigan to declare portions of Lake Erie's waters as impaired.