Lightning killed 11 people in eastern India as the worst floods in years that have left nearly a 1,000 dead and millions displaced 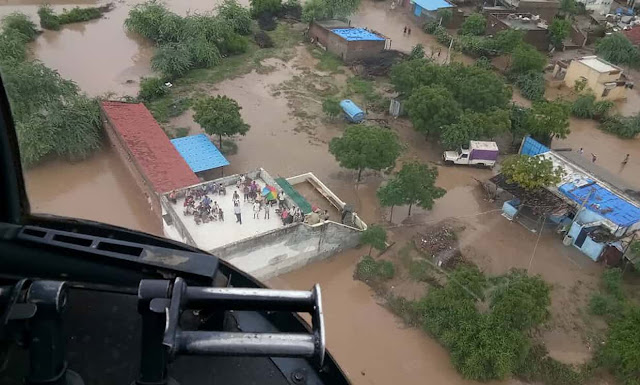 Flood victims, including a patient needing kidney dialysis, await an airlift from a rooftop in Abiyana village, Gujarat after monsoon floods hit. Photograph: AFP/Getty Images
Lightning has killed 18 people in eastern India as large parts of the country swaddle under the worst floods in years that have left hundreds dead and millions displaced.
The state's top disaster management officials made this disclosure on Monday, and revealed that the victims were working in fields in Odisha state when lightning bolts struck them.
Fifteen people were injured on top of the 18 dead.
"The death toll is likely to rise as many were critically injured," A.K. Das, head of the authority, told AFP.
The state has also been badly hit by floods and another three bodies were found in Jajpur district, taking the region's toll from the deluge to seven in 48 hours.
Torrential rains have wreaked havoc across several other Indian states, damaging roads and electricity networks, with nearly 700 dead reported across the country.

94 Dead, Thousands Displaced Gujurat’s State Emergency Operation Centre says that 50 villages or localities in the 5 districts of Banaskantha, Sabarkatha, Patan, Ahmedabad and Mahesana are currently affected.
A further 11 people died in flooding yesterday (26 July), bringing the total number of flood related deaths to 94 so far this monsoon.
As of 26 July there were over 18,000 people currently staying in 29 relief camps set up by the authorities.
Personnel from the Indian Army, Air Force, state forces and 18 NDRF teams are providing rescue, evacuation and relief operations.
Earlier today, Pankaj Kumar, Principal Secretary of the Revenue Department of the Government of Gujarat, said that 36,822 (around 6,000 families) had been moved from flooded areas.
As many as 100 people had been rescued on 27 July alone, with 17 of them airlifted to safety.