It's a "red" aviation warning, the highest level: Alaska's Bogoslof volcano erupted Monday sending an ash cloud about 6 miles into the sky. 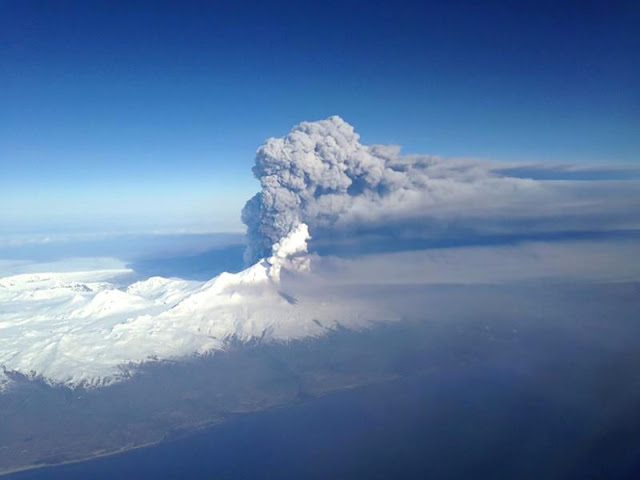 Photo thetimenow.com
Alaska's Bogoslof volcano erupted again Monday morning, sending an ash cloud about 6 miles into the sky.
The "significant explosive eruption" started around 10 a.m. on the remote island in the Bering Sea, northwest of Unalaska Island, and continued for about three hours, the Alaska Volcano Observatory reported.
In response, the observatory issued a "red" aviation warning, the highest level.
Since mid-December, the restless Bogoslof has erupted about 60 times, according to Hans Schwaiger, a geophysicist at the observatory.
"On average, it's once or twice a week," he said.
"But it's been a couple of weeks since the last eruption."
Like the earlier eruptions, the one on Monday came with "very little to no warning," said Michelle Coombs, the observatory's scientist-in-charge.
Around 10:45 a.m., a pilot in the area reported that he spotted an ash cloud rising from Bogoslof and reaching about 32,000 feet in the air, the observatory said.
Coombs said that seismic, infrasound, satellite and lightning data in the area also indicated that Bogoslof had once again erupted.
While the main eruption ended by 1:30 p.m., ash was continuing to form a cloud attached to the volcano, the observatory reported.
Strong winds going south over Umnak Island carried the cloud over the Pacific Ocean and away from Unalaska, said Dave Schneider, a geophysicist at the observatory.
Schneider said he had received no reports of the eruption impacting Aleutian communities. "Presumably the vast amount of airplanes will divert around the small area impacted by the cloud," he said.
The observatory described the length of Monday's eruption as "longer-lived" than most in Bogoslof's string of eruptions since December, and Coombs described the height of the ash cloud as "middle of the pack" for the volcano.