A small spike in major quakes brings a deep mag 6.2, Philippines; it's the third major quake of August and only the 57th of 2017 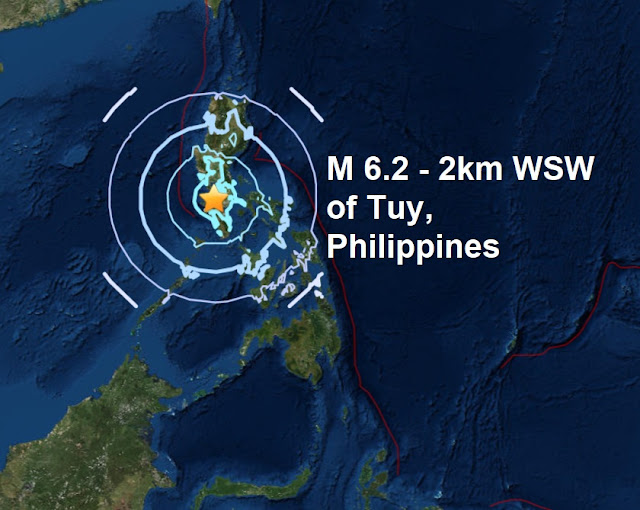 USGS
Green alert for shaking-related fatalities and economic losses.
There is a low likelihood of casualties and damage.
A  deep mag 6.2, Philippines, is the third major quake of August and only the 57th of 2017 which is a low count unprecedented this century.
This week has seen a small spike in major quakes with a tragedy unfolding in China with reports of more than 100 dead and almost 150,000 houses damaged.
Chinese monitors say they've detected multiple landslides but no major building collapses following a powerful earthquake in the country's mountainous southwest that killed at least 100 people.
The official Xinhua News Agency said the Institute of Remote Sensing and Digital Earth under the Chinese Academy of Sciences drew the conclusion from satellite imagery collected after the magnitude 6.5 quake struck Tuesday night.
Another 247 people were injured, 40 seriously, by the temblor, which China's earthquake monitoring agency measured at magnitude 7.0.
At least five of those killed were tourists and thousands of visitors had been evacuated by Thursday amid continuing aftershocks.
Most of the deaths and injuries were recorded in Zhangzha township, near the famed Jiuzhaigou national park that is listed by UNESCO as a world heritage site.