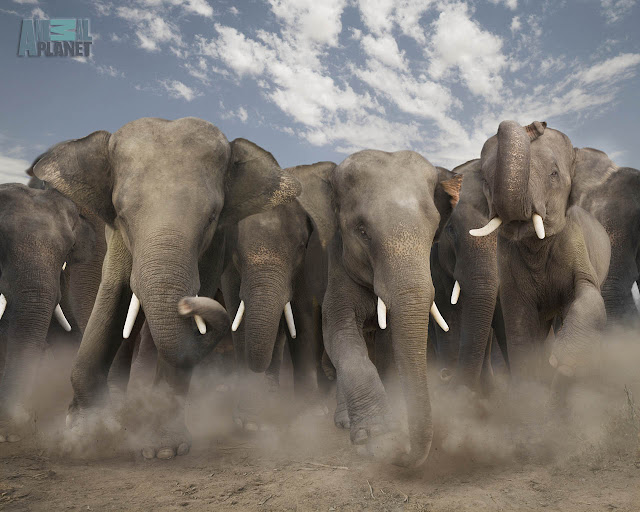 Villagers in Tanzania's northern districts of Monduli are living in constant fear of possible danger to their lives from a herd of wild elephants that strayed into their areas, local authorities said Sunday. The herd raided five villages of Nalarami, Moita, Bwawani, Kilimasie, Mbuyuni and Naiti. Loserian Kimbele, Nalarami Ward Executive Officer, said: "We have reported the matter to the responsible authorities so that they come up with alternative measures to address the vice."
He said that the elephants' invasion caused fear and panic among villagers and destroyed 43 hectares of crops.
The herd posed a serious threat to the civilian life in the area, as villagers depend on farming left in the lurch due to crop devastation.
Iddi Kamata, Monduli District Commissioner confirmed the incident, saying that no causalities reported.
"We have tasked game rangers to chip-in the affected villagers and chase the elephants to the protected areas," he said.
According to the District Commissioner, there are about 43 elephants which strayed from either Tarangire National Park or Lake Manyara National Park, the sanctuaries which are close to the district.
The elephants stormed into four villages of Moita, Bwawani, Kilimasie, Mbuyuni and Naiti.
The official said that the assessment carried out by wildlife officers in collaboration with the department of agriculture showed that more than 40 hectares of farms have been destroyed by jumbos in Naralami village.
"But, we're still assessing the impact of the stormed elephants in the area," he said.
One of the villagers, Tellosa Saning'o said that the elephants stormed the village for the past one week and they have informed the responsible authorities on the matter but nothing has been done. "Most of our farms have been affected with the elephants.
Nothing has been left in the farms," the mother of six said on Sunday.
She further said that some of the villagers have fled their homes fearing for their lives.
"Some of our children have failed to go to school for safety reason," the villager said, noting that most of the human activities have stopped in the area.
According to the law on compensation for destruction made by wildlife, Tanzanian Ministry of Natural Resources and Tourism is responsible for compensating those people who have been affected by elephants' invasion.

In February, The Big Wobble reported ravaging droughts have caused a rise in human-wildlife conflicts resulting in 8 deaths in Kenya: Animals are roaming villages in search of water and food.
The situation is getting worse around the world as  climate change and drought continues to bite.
Several incidences of animals invading water taps and bathrooms in homes in search of water. More here

In a period of record shark attacks on humans around the world and many story's of animals entering villages and towns attacking humans, a new phenomenon is happening in Morocco, dolphins attacking fishing nets to release captured sardines.In Morocco's northern port city of Al-Hoceima, fishermen are clamoring for state support for a struggling sector which they say is under attack from dolphins.In the harbour, fishermen can often be seen mending nets they claim have been destroyed by a type of dolphin they have dubbed El Negro, or "the Black One" in Spanish. Full story here