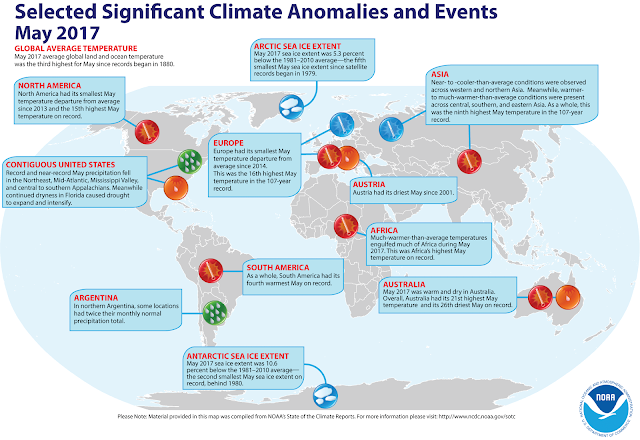 Click on image to enlarge
After two weeks of brutal record breaking heatwaves simultaneously in parts of the US, Europe and the UK, NOAA have released their latest report of worldwide climate for May and the first 5 months of 2017 and it’s no surprise May was the third warmest on record and 2017 so far is the second warmest on record!

Below are the highlights of their latest report…

Consistent with 2016 global trends that continued into the first five months of this year, much of the world’s land and ocean surfaces registered persistently warm temperatures for both May and the year to date*.
Let’s dive deeper into our monthly analysis.

The average global temperature set in May 2017 was 1.49 degrees F above the 20th-century average of 58.6 degrees, according to scientists from NOAA’s National Centers for Environmental Information. This average temperature was the third highest for May in the 1880-2017 record, behind May 2015 (second) and a record-breaking May 2016.

The average temperature from March through May was 1.66 degrees F above the 20th-century average of 56.7 degrees. This was the second warmest for this period, trailing the 2016 record.

The year-to-date average temperature was 1.66 degrees F above the 20th-century average of 55.5 degrees. This was the second-warmest for this period, behind the record set in 2016.
Other notable climate events and facts around the world last month included:
Below-average sea ice at the poles again