It's most active quake area on the planet: New Zealand in store for ‘EXTREME’ earthquake as fault lines collide and large clusters bombard the islands daily 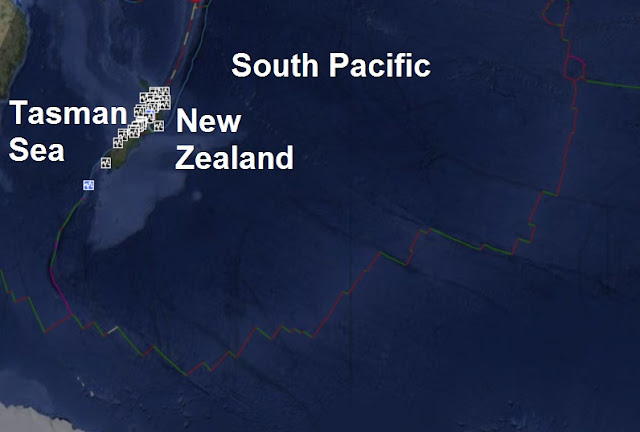 New Zealand could be in store for a devastating earthquake in the coming years with two fault zones set to collide.
In 2011 a magnitude 6.3 earthquake struck Christchurch killing 200 people and severely damaging buildings and infrastructure in the beautiful historic New Zealand city.
Many experts and researchers are now warning New Zealanders to brace themselves for another major quake as large as a magnitude 8 + on the Richter Scale after a study claims  that a collision between the Pacific and Australian tectonic plates – a 500 kilometer stretch known as the Alpine Fault.
New Zealand is bombarded daily with clusters of smaller quakes and is clearly the most active quake area on the planet.
The experts behind the study say– a 500 kilometer stretch known as the Alpine Fault, takes place every 300 years or so, with the last one happening in 1717.
When the collision does happen, the fault will rupture in “an extreme magnitude 8 + earthquake in the coming years”, the team from the Vitoria University of Wellington wrote in their study published in Nature.
Rupert Sutherland, professor of tectonics and geophysics at the Victoria University of Wellington, wrote in an article for The Conversation: “The Alpine Fault is expected to rupture in a major earthquake in the next few years and, even though this may not happen tomorrow it will happen, we know that the fault is at the end of its seismic cycle.
As with the west coast of the US New Zealand is well overdue a big one and the question is when not if that big one will strike!