Another algae bloom responsible for the death of thousands of fish in a Florida Lake: Algae blooms in North America increasing on an alarming scale 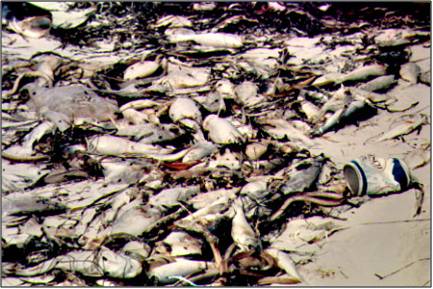 Part of a once vibrant lake is now a deathbed for thousands of fish.
Polk County has gotten several reports of a fish kill at Lake Hancock. Kendall Thomas has been making a living off the fish he catches on the lake for decades.
He said the water hasn't been so low in years, and the mud his motor turns up as he drives his boat across the lake is evidence of that.
More proof sits on the other side of a dam on the lake.
You smell it before you see it.
"Makes me sick," Thomas said, looking at the thousands of dead fish in the water.
"I made a living right there."
Thomas said it's Tilapia he'd normally be able to catch and sell.
He blames the dry conditions and how much water is being released from the dam.
"Now I have to go somewhere else to catch fish and hope that I catch fish," he said.
The water is about three feet lower than it was earlier this year, according to Thomas.
Scientists with the county tell 10News the lack of rain and high temperatures mean there's more algae than usual.
"So essentially the algae is stealing the oxygen out of the water, which then means it's not available for the fish," Tabitha Biehl, with Polk County Parks and Natural Resources, explained.
Whatever the cause, fishermen like Thomas are hoping for rain and hoping the water level on the lake gets back to normal.
With no substantial rainfall in the forecast, it's hard to say when that will be.