50,000 animals dead after 6 months rain fall in just two weeks in Corrientes, Argentina: Situation to worsen because of destroyed pastures 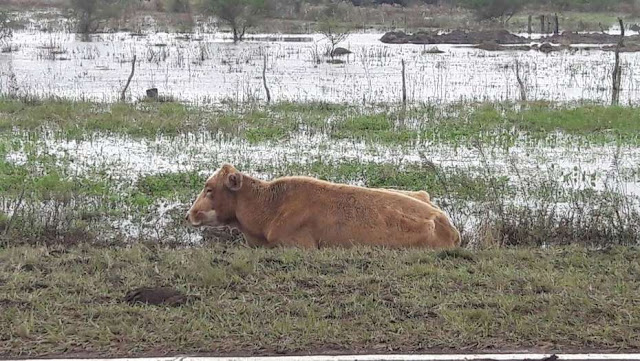 Translated from Spanish
A tragic dramatic scenario has occurred for livestock farmers of Corrientes, Argentina as 50,000 animals have died due to to flooding in the area.
The province of Corrientes has lost an incredible 2.5 million hectares to the flooding with the northern parts of the province being the most affected.
More than 6 months rain has fallen in the area in the last two weeks.
It is estimated that there are 1.5 million heads of cattle throughout the affected region.
Manuel Garcia Olano, Secretary of Agriculture of Corrientes, was able to fly over the area and told reporters that "the situation is devastating.
There is a lot of dead property," he said, because animals have not have to eaten for days and died. " The highest percentage of mortality occurs in calves, but there are also sheep, pigs and birds."
"And in addition, we estimate that when it stops raining, the situation will be worse because in Corrientes, the grass grows only in the spring, so the animals that survive will not have pastures to eat."