Coronal hole = Major Quakes! Only 3 major quakes all month: Now 2 in 1 hour as 2 large holes on the Sun faces Earth! 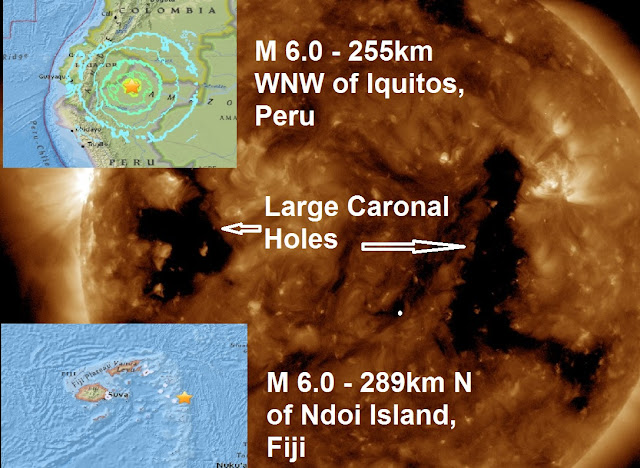 
We've seen one of these coronal holes before.
In early March, it lashed Earth's magnetic field with a fast-moving stream that sparked several consecutive days of intense auroras around the poles.
The coronal hole is potent because it is spewing solar wind threaded with "negative polarity" magnetic fields.
Such fields do a good job connecting to Earth's magnetosphere and energizing geomagnetic storms.


As a stream of solar wind is expected to batter Earth’s magnetosphere with 700 km/s winds in the coming days don’t be surprised if we don’t see more major quakes and volcanic activity.


Today’s quakes bring the total to 24 major quakes on 2017 which is incredibly low for the first four months of the year.


On April the 14th I wrote: Where have all the major quakes gone?


We are into the second half of April yet this year’s total so far is extraordinarily low, 2017 has recorded only 22 quakes of magnitude 6 or higher, this total is the lowest this century by a country mile at this stage of the year.
These statistics are wonderful news for USGS who have claimed major quakes are not on the increase, however this year’s total so far is astonishingly low, at the moment 2017 is yielding 6 major quakes per month which would give us a grand total of 72 for the year, we have to go back 50 years to the 1960’s when so few major quakes were recorded but it’s early days.