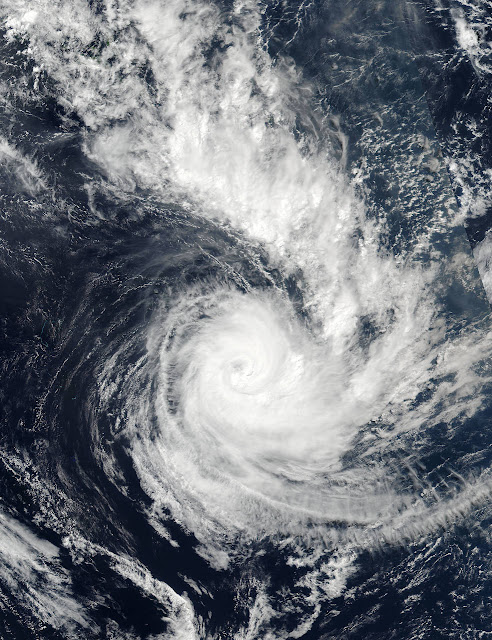 NASA-NOAA's Suomi NPP satellite provided a visible image of Cook on April 10 at 0254 UTC as it was approaching landfall in New Caledonia.
Cook had a cloud-filled eye surrounded by powerful thunderstorms. Credits: NOAA/NASA Rapid Response Team 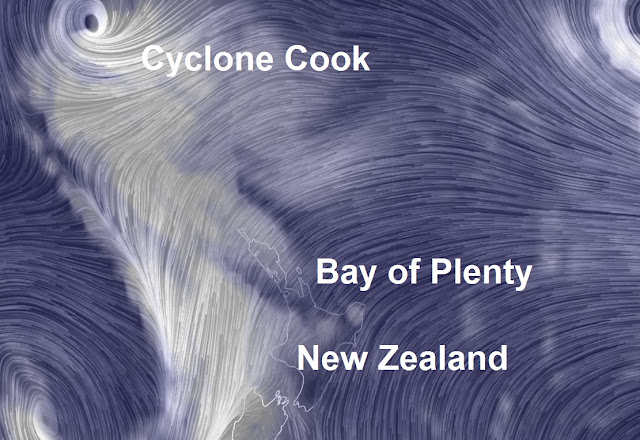 The area is still mopping up from last week's deluge, when the remnants of ex-tropical Cyclone Debbie hit New Zealand, bringing flooding to large swathes of the North Island.
Clinton Naude, group controller for Bay of Plenty civil defence management group, said tropical Cyclone Cook created a changing environment which they would be tracking.
Naude accepted they had learned from last week's weather bomb and were themselves more prepared to pass on advice to residents.

After a once in "500-year event" hit The Bay of Plenty New Zealand 2 weeks ago heavy rain arrived yet again last week, the North Island has just finished clearing up from last week's deluge ahead of Cyclone Cook.

Typically, that amount of rain alone from Cyclone Cook would raise concerns for flash flooding, but the aftermath of Debbie’s torrential rain has left the area extremely vulnerable.
The already saturated ground will not be able to absorb much rainfall, and swollen streams and rivers may quickly overflow their banks.
Conditions will be exacerbated where flood waters remain.
Residents in flood-prone areas should prepare for new evacuation orders.


Increadibly at the end of February this year The Bay  of Plenty was enduring a crippling drought: Incredible amount of rain bringing sub-tropical drenching with heavy downpours to New Zealand since then has left the whole area saturated.