Thousands of dead fish found in a canal in Tainan Taiwan: Oxygen depletion blamed for the deaths 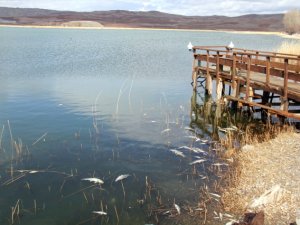 Translated from Turkish
Thousands of dead fish have washed up in Hafik Lake in Sivas, Turkey as ice began to melt in Lake Hafik, which is frozen in winter.
The lake covered with ice in Hafik was said to be without oxygen which killed the fish.
An ice sheet of about 40 centimeters, which formed during the winter months, began to melt with the with the warm spring air.

OXYGEN FREE
The District Governor of Hafik have made studies of the fish deaths with the Provincial Directorate of Food who were at the scene of the investigation and came to the conclusion that the fish died because of oxygen depletion in the lake after being covered all winter with ice.