Scientists surprised by the eruption of the Kambalny volcano in southern Kamchatka Russia: Last eruption in the 1700's 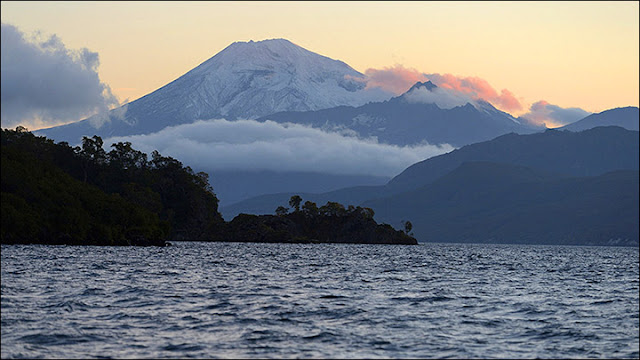 Photo Siberian Times
The eruption of the Kambalny volcano in southern Kamchatka on Saturday has surprised scientists of the Kamchatka Volcanic Eruption Response Team (KVERT) of the Russian Academy of Scientists. "KVERT's specialists since 1993 have been monitoring both by satellite and visual methods the volcanic activities and nothing pointed to a possible eruption of the Kambalny," KVERT's head Olga Girina told TASS on March 25.
"It is a pure surprise for us."
"We continue the monitoring and will analyze possible threats as data come in," she added.
Earlier on March 25, the local branch of the national geophysical service said the ash erupted from the volcano to the height of six kilometers may fall on Severo-Kurilsk (a city on the Paramushir Island).
KVERT's head assured the correspondent the danger has gone now as the ash flow has moved south-east from Paramushir.
However, the high, orange, alert level remains for the aviation.
The Kambalny volcano (a conical volcano built up by many layers (strata) of hardened lava, tephra, pumice, and volcanic ash) is in Kamchatka's south.
Its previous eruption supposedly was in the XVIII century, and prior to that - in about 600 B.C.
The crater is about 800 by 400 meters.
The name originates from the name of River Kambalnaya, as the explorers called it because they saw it was rich in kambala (the Russian name for flatfish).