If proof was needed coronal holes on our Sun is the main quake and volcanic activity factor on Earth it's here! 2 major quakes and 3 volcano eruptions around Alaska's Aleutian Islands

If proof was needed Coronal holes on our Sun are the main quake and volcanic activity factor here on Earth well, it is happening right before our eyes
For the 3rd consecutive day, our planet is inside a stream of fast-moving solar wind flowing from a canyon-shaped Coronal hole in the sun's atmosphere. The gaseous material is pressing against Earth's magnetic field with speeds exceeding 700 km/second.
Earth is responding with a beautiful aurora’s around the poles and an incredible spike in major quakes and volcanic eruptions in the area of Alaska's Aleutian Islands
After only 4 major quakes all March we have suddenly had two in two days, this morning a mag 6.6 - 78km NNE of Ust'-Kamchatka Staryy, Russia, yesterday we had a magnitude 6.1 - 66km West of Attu Island, Alaska, Sunday we had Russia's Kambalny volcano erupting after being dormant for more than 250 years and on Saturday Cleveland Volcano in Alaska's Aleutian Islands woke up alongside the Bogoslof volcano also on Aleutian Islands, below, massive Coronal hole facing Earth.  The gaseous material (solar wind) escaping the enormous hole is pressing against Earth's magnetic field with speeds exceeding 700 km/second. 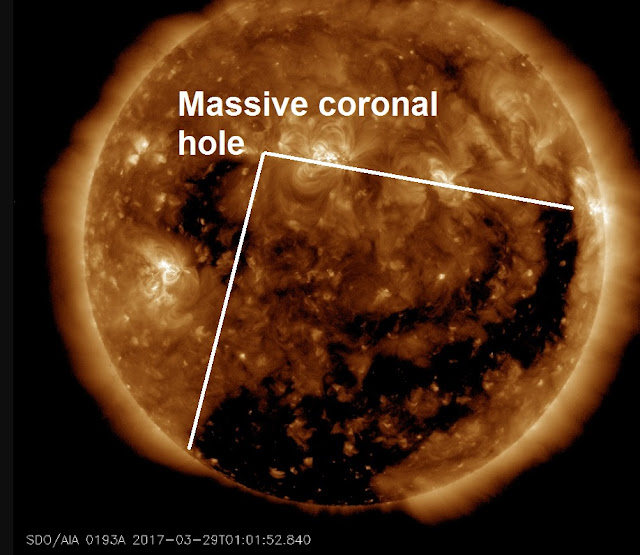 Credit SDO
At the moment, the solar wind shows no signs of flagging. Speeds between 650 and 750 km/s are likely for the rest of March 29th with a 25% chance of G1-class geomagnetic storms, see below.


Today’s major quake was only the 6th of March and only the 18th of 2017, the slowest start to a major quake year this century