Astonishing turn around for drought crippled regions around the globe: California, Zimbabwe, New Zealand and Madagascar have droughts wiped out! 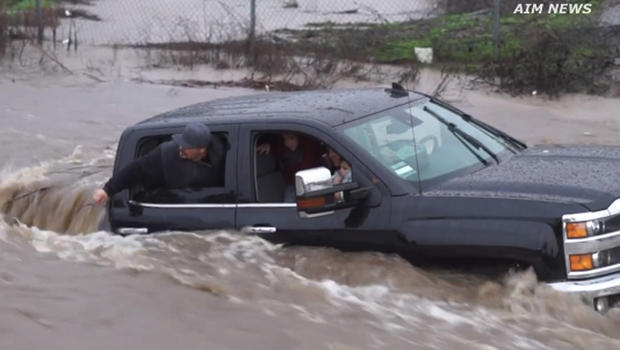 Photo CBS News
Incredible astonishing turn around for four drought crippled regions around the globe
In just a couple of weeks four areas of the globe crippled by drought during the last few years have had more than enough water more or less over night to replenish empty reservoirs and put water stocks back into the plus column.
A couple of weeks ago we saw several torrential downpours in California to rid the State of five years miserable drought and replenish reservoirs to overflowing capacity and giving California the highest amount of captured water since 1995, indeed some dams had difficulty containing the water.
Then maybe much more important, just last week: In Zimbabwe where millions have been affected by a crippling drought in the last couple of years brought on by the super El-Niño event, an absolutely astonishing shift has taken place from a drought condition to an excessively wet situation” and there have been heavy (rain) falls that have surpassed all previous years. The situation was exacerbated by Tropical Cyclone Dineo in mid-February.
The government of Zimbabwe has appealed to international donors to help those affected by floods in the country during the 2016 to 2017 rainy season.
246 people have died, 128 people injured and approximately 1,985 made homeless by flooding in the country since October 2016.
The country’s Civil Protection agency reported a few days ago that another 859 people remained displaced after flooding in Tsholotsho District in Matabeleland North, where the Gwayi River and its tributaries burst their banks in the latest deluge.
And just yesterday we heard:  Another weather bomb to relieve a crippling drought: Incredible amount of rain bringing sub-tropical drenching with heavy downpours to New Zealand.
Another weather bomb to relieve a crippling drought in less than a week in parts of New Zealand
Comes after rain has relieved crippling droughts in Zimbabwe and California recently
The Bay of Plenty is being warned to brace for a sub-tropical drenching with heavy downpours so intense the crippling drought affecting parts of the North Island may be finally be broken.
Heavy rain is expected to hit the country tomorrow and last for up to a week.
Metservice issued a severe weather watch for the Western Bay of Plenty and Rotorua, warning of heavy, possibly thundery, falls from late tomorrow until Thursday this week.
And then just today, Wall of water and sustained wind speeds of 195km/h hits northern Madagascar as "intense" tropical cyclone Enawo makes landfall: 220 mm (8.7 inches) rain per hour: After three successive years of failed rains have left the island nation wrestling with crop failure and a chronic lack of food and clean drinking water, with agencies warning last month that nearly 850,000 people are experiencing “alarming” hunger levels.
Tropical cyclone Enawo is bearing down on Madagascar and flooding was already being reported in the north eastern part of the country on Tuesday.
Enawo was 70km from the coastal town of Sambava earlier in the day and was expected to make landfall at 10am bringing drought relieve to the island.


“Three hundred and thirty thousand are on the verge of a food security catastrophe, next step being famine,” said Dominique Burgeon, director of emergencies and rehabilitation at the UN’s Food and Agriculture Organisation (FAO).