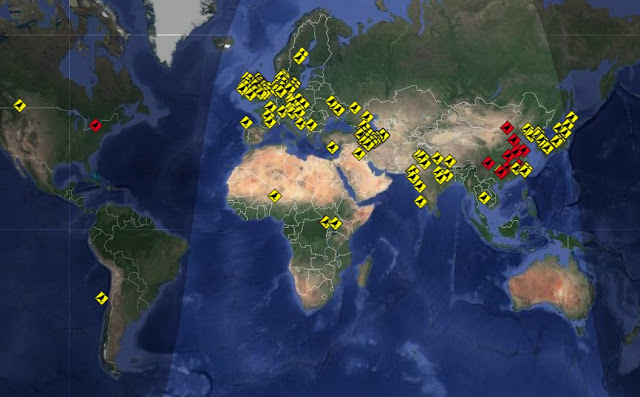 Click on RSOE Alert map to enlarge, red squares indicate humans infected or dead
Around 70,000 chickens have been culled following an outbreak of avian influenza at a farm in Nonsan, South Chungcheong Province South Korea.
The strain of avian influenza that broke out there has been confirmed to be the H5 type.
Disease control authorities have culled 43,000 chickens at the farm and are also culling 26,000 chickens at a farm two kilometers away.
In addition, they will cull 345 chickens at eight small farms within three kilometers.
Moreover, authorities have closed down a feed factory 500 meters from the farm as well as two fertilizer farms using poultry excretion, and disposed of eggs at three hatcheries.
Three cases of avian influenza outbreaks have occurred in the past week ? at an egg farm in Cheongyang Feb. 22, at a duck farm in Hongseong,
Tuesday, and at a chicken farm in Nonsan, Wednesday.
Authorities are looking into the route of the infection, considering the possibility of a spread by migratory birds or infected farms.
The chicken farm in Nonsan is nearby a reservoir where migratory birds gather.
It is also close to a farm run by a meat processing business in Iksan, North Jeolla Province, where avian influenza broke out Monday.
Authorities believe the infection may have occurred through vehicles carrying feed from farm to farm, and are conducting quarantine measures.
They are also providing disinfectants and avian influenza vaccinations to the farms, and fumigating areas migratory birds gather.
In Nonsan, a total of 126 farms are breeding 4.08 million chickens, ducks and quail.