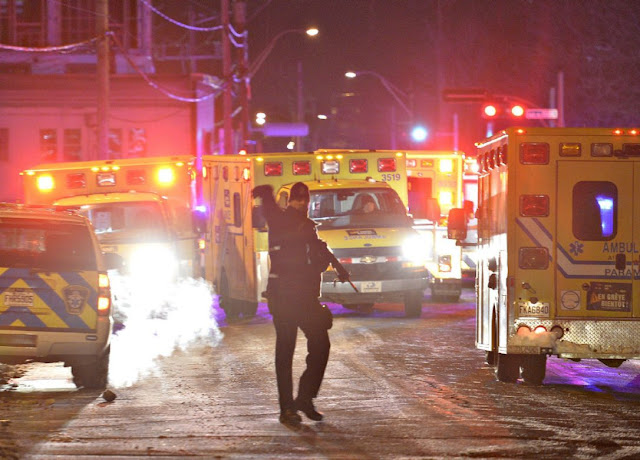 
Police do not believe there are other suspects at large.
The Canadian authorities are treating the shooting as a terror attack.
Several people were killed and more injured after gunmen opened fire in a Quebec City mosque during evening prayers, police said on Sunday evening.
Mohamed Yangui, the mosque's president, told reporters that five people were killed after gunmen opened fire in the mosque during evening prayers.
Police confirmed several people "were killed" and "several injured" in the shooting but did not specify how many.
Quebec City police spokesman Constable Pierre Poirier said two suspects were arrested and the scene was declared "secure".
A large perimeter was set up around the Islamic cultural centre of Quebec, in the Sainte-Foy neighbourhood.
An eyewitness saw heavily armed tactical police entering the mosque, Reuters reported.
Police spokesman Etienne Doyon declined to say whether there was a gunman inside the mosque. Local newspaper Le Soleil said it had obtained information that one of the suspects was a 27-year-old with "a Quebec name", and one had an AK-47 automatic weapon in his possession.
Police, however, have not released nor confirmed these details.
A witness told CBC's French-language service Radio-Canada that two masked individuals entered the mosque.
"It seemed to me that they had a Quebecois accent.
They started to fire, and they they shot they yelled, 'Allahu akbar!'
The bullets hit people that were praying. People who were praying lost their lives.
A bullet passed right over my head," said the witness who asked to remain anonymous.
"There were even kids.
There was even a three-year-old who was with his father."
Quebec City police said that "the situation is under control, the mosque is secure and the occupants were evacuated" adding that the investigation is ongoing.
"Tonight, Canadians grieve for those killed in a cowardly attack on a mosque in Quebec City.
My thoughts are with victims and their families," Justin Trudeau, the Canadian prime minister, said on Twitter. Philippe Couillard, Quebec's premier, said on Twitter that "government is mobilized to ensure the safety of people of Quebec."
"Quebec categorically rejects this barbaric violence.
Our solidarity is with the victims, the injured and their families," the premier said in a second tweet. "We unite against violence.
Solidarity with Muslim Quebecers." Ralph Goodale, the public safety minister, said on Twitter Sunday that he is deeply saddened by the loss of life.
His office says no motive has been confirmed.
"Earlier, a witness told news agency Reuters that up to three gunmen fired on about 40 people inside the Quebec City Islamic Cultural Centre.
"Why is this happening here?
This is barbaric," said Mr Yangui.
"Our prayers tonight are with the people of Quebec City as they deal with a terrible attack on a mosque.
In June 2016, a pig's head was left on the doorstep of the cultural center. Mr Yangui, who was not inside the mosque when the shooting occurred, said he got frantic calls from people at evening prayers.
He did not know how many were injured, saying they had been taken to different hospitals across Quebec City, Reuters reported.
Incidents of Islamophobia increased in Quebec in recent years amid a political debate over banning the niqab, or Muslim face covering.
In 2013, police investigated after a mosque in the Saguenay region of Quebec was splattered with what was believed to be pig blood.
In the neighboring province of Ontario, a mosque was set on fire in 2015, a day after an attack by gunmen and suicide bombers in Paris.

Apparently a white supremist did it.