Democracy in action! Just 8 men own same wealth as half the world: As much wealth as 3.6 billion people 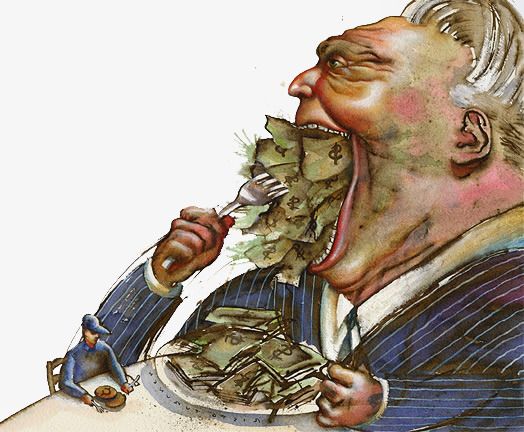 As a blogger and the fact I have friends and associates all over the world I need my Microsoft working computer and Facebook to survive, however the fact I’m contributing to the $140 Billion net worth of Bill Gates and Mark Zuckerberg makes me, to put it mildly, uneasy.
In a new report the gap between the super-rich and the poorest half of the global population is starker than previously thought, with just eight men, from Bill Gates to Michael Bloomberg, owning as much wealth as 3.6 billion people, according to an analysis by Oxfam released Monday.
When hundreds of millions of people are trapped in poverty and try to survive on a dollar a day, thousands more dying of hunger or disease every day the fact that just 8 people have as much money as half the population of the world is simply staggering.
Presenting its findings on the dawn of the annual gathering of the global political and business elites in the Swiss ski resort of Davos, anti-poverty organization Oxfam says the gap between the very rich and poor is far greater than just a year ago. It's urging leaders to do more than pay lip-service to the problem.
If not, it warns, public anger against this kind of inequality will continue to grow and lead to more seismic political changes akin to last year's election of Donald Trump as U.S. president and Britain's vote to leave the European Union.
"It is obscene for so much wealth to be held in the hands of so few when 1 in 10 people survive on less than $2 a day," said Winnie Byanyima, executive director of Oxfam International, who will be attending the meeting in Davos. "Inequality is trapping hundreds of millions in poverty; it is fracturing our societies and undermining democracy."
Oxfam used Forbes' billionaires list that was last published in March 2016 to make its headline claim. According to the Forbes list, Microsoft founder Gates is the richest individual with a net worth of $75 billion. The others, in order of ranking, are Amancio Ortega, the Spanish founder of fashion house Inditex, financier Warren Buffett, Mexican business magnate Carlos Slim Helu, Amazon boss Jeff Bezos, Facebook creator Mark Zuckerberg, Oracle's Larry Ellison and Bloomberg, the former mayor of New York.


Oxfam outlined measures that it hopes will be enacted to help reduce the inequality.
Full report here