Deadly record snow fall for the US West crushing buildings! Heavy rains and floods in California dumped a record amount of snow on Mammoth Mountain 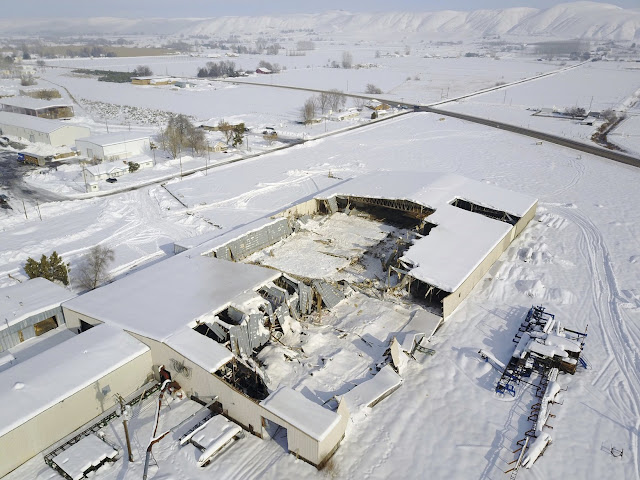 The Partners Produce facility in Payette, Idaho, collapsed under the weight of snow. (Jason Brainerd/Rapid Aerial LLC via AP)

Record snow fall for the US West this year is proving heavy going to say the least, the accumulated weight of snow is proving too much for some buildings, which have collapsed in Oregon, Idaho, Alaska and Colorado.
The record snow has led to some injuries and at least one death, when the roof of a woman’s snow-laden porch in northern Idaho fell while she was underneath it, officials say. Authorities fear more collapses will come.
Storms this month have blanketed the West and kept dumping more snow on top of it. Experts say the rare combination of greater snowfall at lower elevations and prolonged cold temperatures that allowed the snow to accumulate without melting away is partly to blame for the collapses.
California drought eased by record rain and snowfall
Meanwhile heavy rains and floods affecting California also dumped a record amount of snow on Mammoth Mountain in January — 20½ feet, the most in the resort town’s history, local tourist officials announced.
The mountain has received 246 inches of snow since Jan. 1, blasting through the old monthly record of 209 inches. The resort town has received more than 29 feet of snow since the ski season began last year.

October rains were four times the monthly average in many parts of the state, followed by a strong December and an even better January. The Sierra Nevada snowpack, which provides a third of the state’s water when it melts in the spring and summer, is at nearly 200% of average for this time of year.


Many of the state’s biggest reservoirs are full, and much of the northern half of the state is considered to be out of drought conditions, reports the LA Times.