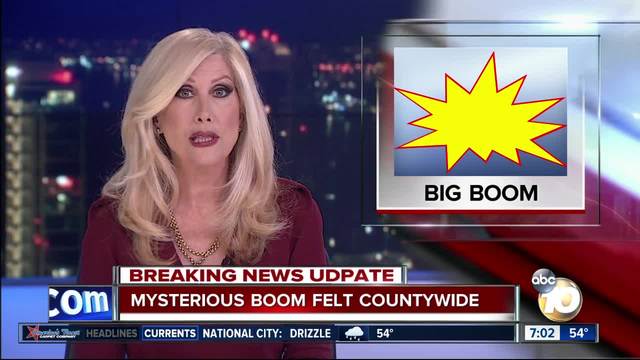 Photo 10News
Many people reported hearing two large "bangs" and felt the earth shake just after 3 p.m. Tuesday in San Diego.
Military and airport officials deny causing mysterious "booms."
"Was there an earthquake that made that big boom at 3:15 p.m.?"
Nancy Whitaker posted on Facebook. Santee residents reported seeing a large glowing ball in the western sky.
"I automatically thought it was a earthquake, my car started moving back and forth in Imperial Beach!"
Laura Reynolds said. "Are we having an earthquake? Our sliders won't stop shaking, but my chair isn't moving and it's not wind," a Coronado resident posted to social media.
"I heard it here on the Strand, but didn't feel anything.
Sounded like 2 loud bangs, I thought it was thunder.
I am curious what it could have been," another Coronado resident posted.
USGS did not detect an earthquake in San Diego County during that time.
FOX 5 reached out to military officials and law enforcement to see if they had anything to do with the various "strange" reports.
"A military aircraft flying in a Military Operations Area over land also could made a sonic boom," Gregor said.
MCAS Miramar Capt. Kurt Stahl said they reviewed all tapes with the FAA and was confident that it wasn't caused by their aircraft.
"We reviewed all tapes with the FAA and with our fixed-wing squadrons aboard MCAS Miramar, and we can confirm that no aircraft from MCAS Miramar reached supersonic speeds yesterday. Therefore, we can rule out that this noise was caused by an aircraft based out of MCAS Miramar.
For additional background, we do not operate our aircraft at supersonic speeds within 30 miles of populated areas.
As for those reported today, this is the first I have heard of any today; I am confident that they are not being caused by our aircraft."
San Diego International Airport officials said nothing was caused by aircraft arriving and departing.