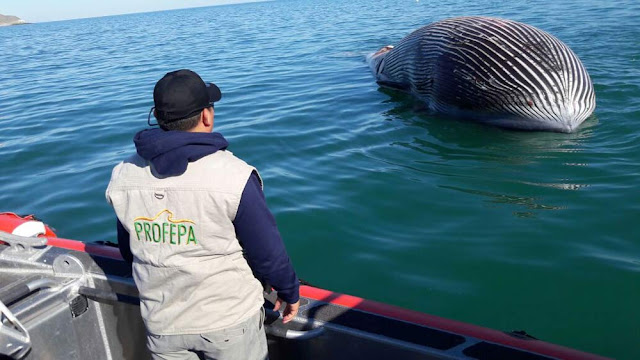 In both cases, the specimens were found in an advanced state of decomposition and their death was associated with the red tide.
It is the most endangered marine mammal in the world, with only about 30 specimens remaining but three have washed up dead in the last week off the coast of Baja Mexico.

A dead dolphin was also found,
The whales and the dolphin are thought to have died from the natural phenomenon known as tide Red algae. 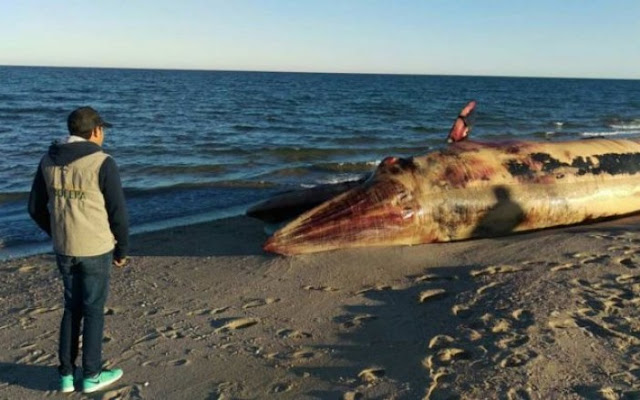 The findings were made in the Upper Gulf of California by personnel from the Federal Attorney's Office for Environmental Protection (Profepa), Marine Secretariat (Semar), Secretariat of National Defense (Sedena) and the Sea Shepherd group, among others. The first specimen, an adult humpback whale, was found dead on January 19 at "Punta Estrella" 20 kilometers south of San Felipe, Baja California.
The next day, on January 20, a specimen of the juvenile Common Whale juvenile whale was found, in an advanced state of decomposition, three kilometers northwest of the coast of San Felipe.
On the same day, another humpback whale was reported to be dead, at a juvenile stage, 12 kilometers northwest of Puerto de San Felipe.
In addition, a long, adult, highly decomposed dolphin was located one kilometer south of the Campo Las Arenas Fishing Club, also in San Felipe.
In a press release, Profepa indicated that according to the information that has been obtained so far and based on analyzes carried out by the Regional Unit for Protection against Sanitary Risks of the state government, one of the probable causes of the mortality of Marine mammals, is the presence of a natural phenomenon that cyclically affects the region by the blossoming of harmful algae, commonly known as red tide, which generates a paralyzing toxin that not only affects marine organisms, but also represents a risk to Human health, reports Tabasco Hoy.