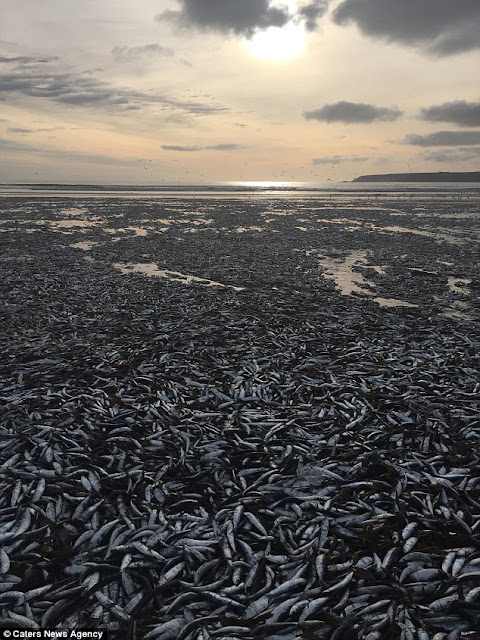 Thousands of fish washed up on Marazion Beach, Cornwall on Saturday morning

Tens of thousands of fish washed up on Marazion Beach, Cornwall UK on Saturday morning

Tens of housands of fish have washed up on a Cornwall beach for the second time in a month creating an eerie scene. On December 4 locals came across stacks of dead mackerel and herring on Pentwean Beach and now more have been discovered by a dog walker on Marazion Beach which is 40 miles from the first location. He said his dog nor seagulls flying over head wanted to go near the dead sea creatures and didn't know why. Full story here

They call it the drunk and dead fish phenomenon in Indonesia and it seems to be spreading, last week 100 tons were reported dead in Agam, Sumatra, Indonesia. This week its 10 tons washing up dead in Lake Kerinci Indonesia. Full story here

Thousands of dead fish have been found in the El Tunal River in Mexico, officials are blaming a water treatment plant for the disaster, raw waste being the likely cause.  Full story here

The Hokkaido prefectural government on Friday announced the first case of a highly virulent strain of bird flu virus in poultry in Japan’s northernmost island prefecture. With a highly pathogenic H5 strain confirmed in a detailed analysis, the Hokkaido government will begin Saturday culling around 210,000 chickens at the poultry farm in the town of Shimizu. Earlier Friday, about 30 chickens were found dead at the farm and five tested positive for bird flu, as well as two living chickens, in a preliminary test. Seven other poultry farms are located within a 10-kilometer radius, with a total of another 192,000 chickens. Outbreaks of the highly pathogenic H5 virus have been seen at poultry farms in the prefectures of Aomori and Niigata since November where a total of about 570,000 chickens have been culled. Full story here

An outbreak of bird flu has been confirmed on a British turkey farm which has sparked a mass cull in the run-up to Christmas. The highly infectious H5N8 strain of the virus was detected in more than 5,000 birds on a poultry farm near Louth in Lincolnshire, the Government said on Friday. Birds on the farm, which have not already died, will be culled in order to prevent the disease from spreading as a 3km protection zone was put in place. Full story