The big freeze begins as winter storm barrel's into North Dakota as the US prepaires for massive cold snap! 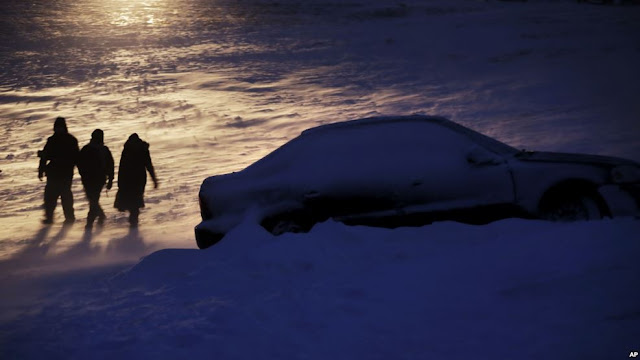 Photo VOA News
A winter storm expected to barrel into the northern Red River Valley on Monday afternoon and Tuesday is now projected to dump more than a foot of snow on Grand Forks.
Meteorologists are warning eastern North Dakota the first major winter storm of the season could blast the region with 13 inches of snow overnight Monday and throughout Tuesday.
Strong winds could cause blizzard-like conditions Tuesday.
"This thing has ramped up over the past 24 hours," said meteorologist Ryan Knutsvig of the National Weather Service, whose agency projected a maximum of 10 inches of snow Monday morning.
The heaviest snow is expected to fall between 6 p.m. Monday and 6 a.m. Tuesday, when Knutsvig said snow could fall as fast as 2 inches per hour.
Light snow is expected through Tuesday. Meteorologists believe the northern Red River Valley will see 3 to 7 inches of snow overnight Monday and 2 to 4 inches Tuesday.
Grand Forks County is projected to receive 6 to 15 inches of snow, Knutsvig said, with 15 inches described as the "worst-case scenario."
Winds are expected to kick up Tuesday, meteorologists say, and possibly create blizzard conditions. "The main concern is 30- to 40 mile-per-hour winds combined with the snow on the ground, plus what will be falling at that time," Knutsvig said.
He said blizzard conditions are most likely in the Devils Lake area between 6 a.m. and 9 a.m. Tuesday; the northern Red River Valley has its highest blizzard chances between 9 a.m. and 3 p.m. Tuesday.
The snow is forecast to usher in heavy winds from the north, which are expected to push a bitter cold front that will plunge temperatures into the single digits for the remainder of the week.
Knutsvig said the storm system was lingering in the western part of the state in the early afternoon but was beginning to move east rapidly Monday afternoon.
Meteorologists believe the overnight snow will be wet and heavy, with temperatures in the high 20s, but the snowpack is expected to lighten Tuesday as temperatures drop.
The average projected snowfall for Grand Forks is 13 inches, with a foot expected in Devils Lake and in Crookston and Thief River Falls.
"If we have winds like we've been projecting, the drifts could be high," Knutsvig said.
The southern Red River Valley will miss the brunt of the storm, with Fargo expected to receive at least 3 inches of snow and 9 inches at maximum, he said.
The North Dakota Department of Transportation and North Dakota Highway Patrol have issued a no travel advisory for Divide County in northwestern North Dakota beginning at 2 p.m. Monday.

Weather alerts are very important, especially when living in areas prone to extreme weather conditions. This alert of a winter storm into North Dakota proves my point. In light of this, I find it absolutely necessary for anyone living in such areas to be fully prepared. Learn how to prepare for a winter storm here: http://survival-mastery.com/basics/winter-storm-preparedness.html

I do not live nor have relatives in North Dakota, but I have to appreciate the efforts of the media to keep the American people updated about the weather changes. This news must have helped a lot of people living and travelling to or from North Dakota. The best way to survive a winter storm is to prepare in advance: http://wildernessmastery.com/survival/how-to-prepare-for-a-winter-storm.html