More than 100,000 homes are without power as more than two ft of snow and powerful winds bring chaos to Maine 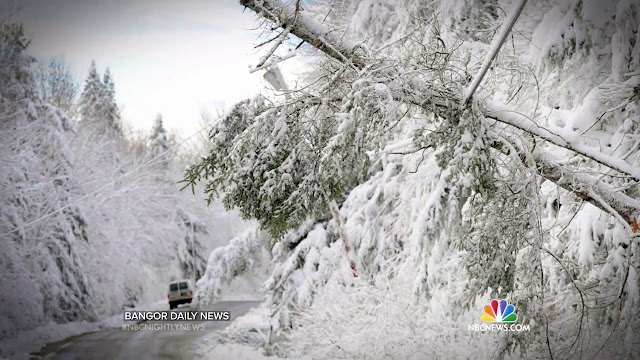 Photo NBCNews
More than 100,000 Maine homes are without power after a powerful winter storm brought two feet of snow and powerful winds through the state.
More than 90,600 Central Maine Power customers were without power at 10:45 a.m. Friday, including 26,877 in Cumberland County and 23,374 in Kennebec County.
Emera Maine reported 15,384 customers without power, primarily in Penobscot and Hancock counties.
It may take multiple days to restore power in some areas because of widespread damage and difficult travel, CMP said in a statement on Twitter Friday morning.
Hundreds of crews from U.S. states and Canada are assisting the company fix damage from the storm, it said.
The hardest hit areas for power outages in Cumberland County includes Cumberland, Falmouth and Gorham.
In Cumberland, more than 95 percent of its 3,335 customers were without power as of 9:30 a.m. Friday morning, according to CMP. In York County, more than 1,600 customers in Lyman and 1,200 customers in Saco are without power.
Gail Rice, spokeswoman for CMP, said it is too soon to estimate restoration times for areas without power, but the power utility will update its website with estimated times as they become available. "We have to get out there and see what we're dealing with," she said early Friday.
Primary roads were mainly clear by mid-morning Friday and public safety dispatchers reported minor crashes during the morning commute.
It will take longer to fully clear heavy, sticky snow off secondary roads.
The city of Portland has declared a city-wide parking ban from 10 p.m. Friday to 6 a.m. Saturday so city crews can finish clean-up in the city.
Main traffic arterials were plowed Friday morning but crews still had to get to some secondary streets, said Public Works Operations Manager Steve Earley.
"Residential streets are kind of a mess, some we haven't even gotten to yet," Earley said.
Department of Transportation crews have been working on roads since yesterday morning, but the wet, heavy snow and obstructions caused by downed trees and powerlines has complicated clear-up efforts, said Department spokesman Ted Talbot.
"The roads are still snow covered, this is a tough type of snow, very heavy, sticky," Talbot said. Blowing and drifting snow may make clearing roads more difficult, he added.
"It is going to be a slow commute because of conditions on the road," Talbot said.
Naples hit the jackpot with 27 inches of snow, said Andy Pohl, a meteorologist with the National Weather Service in Gray.
Snow totals varied widely across Cumberland County, where 24 inches were reported in North Sebago and 8 inches in the North Deering section of Portland.
In York County, North Waterboro got 25.6 inches of snow, while 24 inches were reported in Alfred and Acton.
In Hollis, 22.5 inches fell at the home of a weather service employee, who reported as much as 5.8 inches in one hour.
"That's a pretty crazy rate," Pohl said.
"Cumberland and York counties took the brunt of it."
Pohl said the snow has ended in southern Maine, but high winds combined with heavy snow could cause more power outages.
"We may see some gusts upwards of 30 mph this morning," he said.
The Maine Emergency Management Agency is monitoring power outtages, but so far no emergency shelters have been declared, said spokeswoman Susan Faloon.
"There are no reports of anything major from any of the counties," Faloon said. "Right now it is just clearing the roads and getting the power back on."
Warm temperatures and bright sunshine Friday will bring a lot of melting, but the department is expecting a hard freeze and icy road conditions as temperatures plummett into the teens and single digits Friday evening.