Many Thousands Of Herring, Starfish, Lobsters And Even A Whale Still Washing Up In A Remote Area Of Nova Scotia 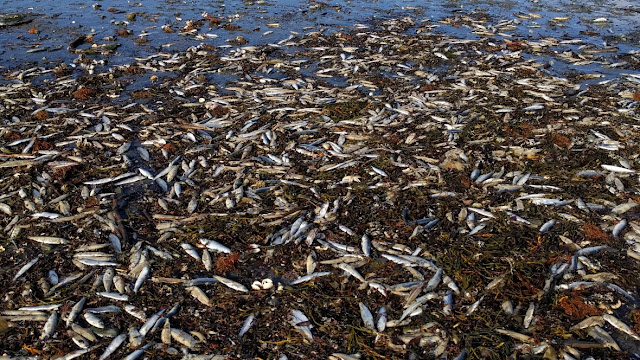 Photo cdnpoli
Scientists still don’t know what’s killing large numbers of fish and other sea creatures washing up in a remote area of western Nova Scotia but they do have a few theories.
Scores of herring, starfish, lobsters -- even a whale -- have washed up over the past month between St. Marys Bay to Tusket. Scientists say it’s too soon to know if the whale’s death is related to the others.
Marine ecologist Kent Smedbol, who works for Fisheries and Oceans Canada, talked to CTV Atlantic about the possibilities.
Disease So far, all tests for bacterial and other diseases have all come back negative, according to Smedbol.
There are some viral tests that have not yet to be completed, so disease remains a possibility.
Storm runoff Storms can be deadly for marine life, according to Smedbol.
So far nothing anomalous has been noticed in the weather patterns but it remains a possibility, according to Smedbol.
The salinity of the water is being tested.
Human contaminants Smedbol said it’s possible some sort of human-made pollutant or agricultural runoff caused the problem but it seems unlikely considering there are few farms or people in the area. Either way, St. Marys Bay “basically empties and refills once a day,” according to Smedbol, “so if it was a one-off event it might have already washed out of the bay.”
The new tidal turbine, a new five-storey-high underwater turbine started generating power for consumers in November.
Many armchair scientists believe this is the cause of the die-off but Smedbol says the evidence to date doesn’t support that theory.
Video evidence shows some of the animals washing up on the beach are still alive when they get there, and the turbine is about 160 kilometres away. CTV News