10,000 evacuated living along the Bay of Bengal coast: Tropical Cyclone Vardah poised for landfall while nearly 100,000 students suffer from the cold 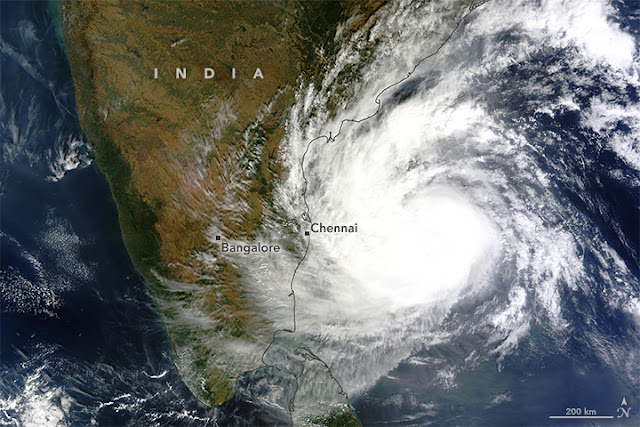 One week after dropping flooding rains and killing 14 people in southern Thailand, Tropical Cyclone Vardah was poised for landfall along the east coast of India.
Over 10,000 people living along the Bay of Bengal coast in SPS Nellore district of Andhra Pradesh were on Monday evacuated to relief camps amid heavy rains due to the influence of severe cyclonic storm Vardah.
Eight fishermen belonging to Tamil Nadu were rescued from the sea near the Sriharikota High Altitude Range while search was on for ten more persons feared trapped at sea.
With the cyclonic storm Vardah set to make landfall between Sriharikota and Chennai, a state of high alert is being maintained in SPS Nellore district.
"The police and CISF personnel are on the job and all the ten fishermen are safe.
But they are somehow reluctant to come to the shore.
We will soon bring them out," Nellore Superintendent of Police Vishal Gunni told PTI over phone. Municipal Administration Minister P Narayana, who is camping in Nellore to oversee the rescue and relief operations, said Vakadu and Tada received 4.8 and 3 cms of rain, respectively, since on Monday morning.
"We have already moved over 10,000 persons in seven vulnerable mandals to safety.
All necessary measures have been taken to ensure safety of people," he said.
Earlier, Chief Minister N Chandrababu Naidu had directed the Nellore district administration to evacuate people in about 255 low-lying areas to safer places.
The Chief Minister reviewed the situation through teleconference and asked the official machinery to remain on high alert to prevent loss of lives.
The holy Tirumala Hills have been receiving rainfall since last night, causing some hardship to devotees visiting the shrine of Lord Venkateswara.
Temple Executive Officer D Sambasiva Rao has directed the temple staff to make necessary arrangements for the comfort of the pilgrims in view of the inclement weather.
Under the influence of Vardah, Nellore and Chittoor districts are expected to receive heavy rainfall. In Sullurpeta mandal in Nellore district, 30 persons were shifted to a relief camp this morning.
The South Central Railway has cancelled some passenger trains between Sullurpeta and Chennai in view of the cyclone.
The Vijayawada-Chennai-Vijayawada Pinakini Express has been diverted via Renigunta and Arrakkonam. Some other Express trains on the Chennai route have also been diverted via Arrakkonam.
Meanwhile the dip in temperature has hit education of thousands of children studying in Kasturbaa and other government residential schools in Telangana.
The students in these schools are unable to sleep well due to the severe cold and they are finding it difficult to wake up early in the morning.
The cold is severe in Agency areas so much so that it is dropping below 10 degree Celsius in some areas.
As students are not able to sleep well and focus on their studies, the government has decided to supply woollen blankets to  kids this year.
Deputy Chief Minister and Minister for Education Kadiam Srihari said the problem was identified first in 391 Kasturbaa schools in the state, in which 73,000 girls are studying.
"The children are not having proper blankets to protect them from the cold and this affecting their studies," he said, adding that students in other residential schools and welfare hostels were also facing the same situation.