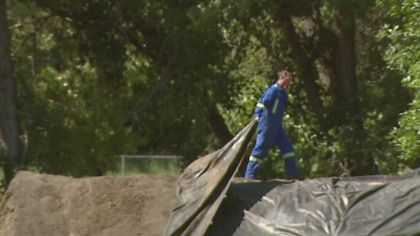 Sludge...Photo denver.cbslocal.com
Low level radioactive sludge is being removed from a water treatment plant in Englewood, following a CBS4 investigation.
Some workers believe the sludge at the Allen Water Treatment Facility at Windermere Street and Layton Avenue may have given them cancer.
Linda Black's husband Jim worked at that water treatment plant for 20 years until he died.
"I believe he strongly felt the sludge was the reason for the number of employees who had cancer," she told CBS4.
Three employees have died from cancer.
Others may have cancer, like Ken Kloewer.
"Now they have discovered a lump in my neck and I'm scared to death about what's going on," he told CBS4 earlier this year.
The city maintains the radiation in the waste is of a low level and tests show it does not pose a threat. Eric Keck, the Englewood City manager, also told CBS4 earlier this year.
"We are working within the realm of what is acceptable for not only our employees but our residents."
A 1998 risk assessment warned the dust particles, if inhaled, may release radioactive particles into the lungs.
Linda Black says her husband was worried.
"He did not want to see anyone else at the plant come down with cancer," she said.
Last Month City Councilwoman Laurett Barrentine challenged the Englewood director of utilities on the issue.
"We're going back with something that I have from the community claiming it is a carcinogen in our community not being properly handled," she said at a city council meeting.
He assured her they were in compliance with the regulations.
The sludge is going to a secure burial vault.


130 million tons of a 4,000-foot-high mountainside collapse in Glacier Bay National Park
Alaska
A real "Day After Tomorrow"on the cards as the Jet Stream, the Gulf Stream both stutter and a Solar Minimum on the way!
Warning to people in New Mexico after 20 year old woman dies from the deadly Hantavirus Pulmonary Syndrome disease
Posted by Gary Walton at 10:04 am