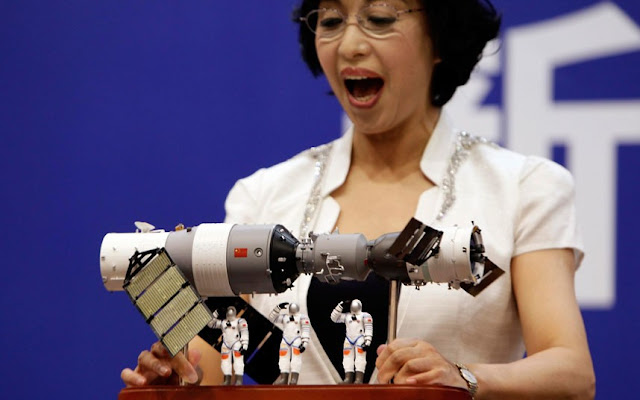 Photo oddstuffmagazine.com
China's first space station, Tiangong-1, appears to be completely out of control and may have lost communication with the Command and Control Center in Beijing.
This was according to amateur satellite tracker Thomas Dorman last month, but since then, Chinese officials have remained suspiciously silent on the issue.
"If I am right, China will wait until the last minute to let the world know it has a problem with their space station," Dorman told Space.com.
"It could be a real bad day if pieces of this came down in a populated area... but odds are, it will land in the ocean or in an unpopulated area," he added.
"But remember - sometimes, the odds just do not work out, so this may bear watching."
Tiangong-1 - which translates to mean "Heavenly Palace" - was launched in 2011 as China's first space-laboratory manned module.
Its tenure ended in March this year after an operational orbit of 1,630 days, Chinese state media reported.
However, since the satellite has been dormant for a few months, some experts have said the space station's behavior could be explained by other means.
"It seems it may be much ado about nothing," T.S. Kelso, a senior research astrodynamicist at the Center for Space Standards and Innovation, also told Space.com.
"I guess I would want to see some very specific data, notionally covering a period where Tiangong-1 was supposed to be stable, to show that it is now uncontrolled, before reading too much more into this."
Kelso also added why China might be keeping the space station suspended in meaningless orbit for the time being, adding:
"The suggestion has been made [that] the reason China hasn't done a re-entry of Tiangong-1 is, the space station is low on fuel, and China is waiting on a natural decay to a much lower orbit before they can do a burn to bring the station down."