Once-in-a-generation -70F bomb cyclone lashes the US with temps rarely seen in the US before and is colder than MARS! The Bomb cyclone is so cold it can cause frostbite in minutes: Almost 10,000 flights cancelled already and hundreds of thousands expected to be without power! 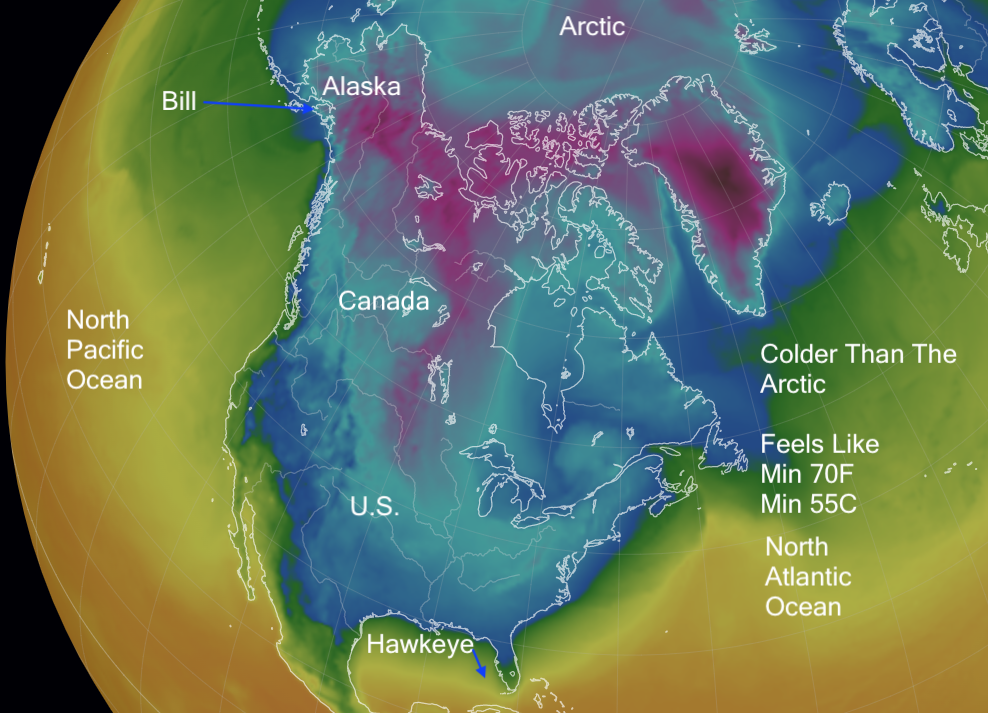 Meteorologists say the winter storm could become a "bomb cyclone" by Friday. Bomb cyclone is a term given to an explosive storm that intensifies rapidly, with its central air pressure dropping by at least 24 millibars in 24 hours.

With a distance of almost 4,000 miles (almost 6,500 km) between them, Bill Laughing-Bear in Alaska, and Hawkey in South West Florida are both about to "celebrate" the coldest Christmas in 40 years.

Hi Gary! Maybe you have heard about this weather forecast coming our way....? ("I surely have Hawkeye!") This side of the aftermath is troubling with food already in crisis mode! It just never stops does it!? I guess it won't... Anyway, I just wrote you this concern due to what happen in T[exas]. (Hawkey predicted this incredible coldwave would hit Texas months ago).

It's happening. I really thought not until mid January or even February...but no, December! I have no heating or cooling in my damaged dwelling (damage Hawkeye sufferd from Hurricane Ian in September) so [I] will be going out to buy a space heater today. Sure wish I didn't have to spend money on it but Florida's predictions are in the 30's F, my poor duckes and tropical bird friends! Anyway, one other reason I'm sending this link is the map shown, and the color variances. Look at the contrast lines of colors .... typical of the geo-engineered BS that it is [going on]. Also, compare our map and locations regarding temps to your neck of the woods. I'm sure it will raise your eyebrows.

Hawkeye is correct, the UK and most of Europe are enjoying a very mild build-up to Christmas compared to North America!

Thousands of people have become stranded after desperately trying to reach loved ones and families for the Christmas holidays but nearly 10,000 flights have been cancelled due to the unprecedented conditions.

Already tens of thousands of people are without power in Texas, Oklahoma, Missouri, Tennessee, Mississippi and Louisiana.

It is so cold, forecasters are claiming, winter wheat fields across southwest Kansas, northwest Texas, and Oklahoma is exposed due to the lack of snow cover, increasing the incidence of winter crop kill, which would be devasting to an already compromised wheat shortage due to the war in Ukraine.

According to reports, the powerful Arctic winter storm has placed around 150 million people under weekend weather alerts ahead of the busiest travel days of the year. The alerts stretch from coast to coast and reach as far south as the US-Mexico border and Florida, the Sunshine State. The National Weather Service (NWS) said temperatures of -50F (-45C) and -70F were possible by the end of this week in some parts of the country.

If you want to help Hawkeye and her Husband you can donate HERE in my (Gary Walton) coffee account. (PAYPAL) Make sure you mention the gift is for Hawkeye and not "Gary," and I will make sure she gets the money thanks—Gary.

Dear Gary, Hawkeye, and readers of the Big Wobble,
As North America gets pounded, I have to think man played a part in of all of this. This week I had temperatures were down to -35F which is just over -37C if I remember correctly. We have not had these temps in this part of Alaska for 11 years. And on those clear days I watched the chemtrails being added to this northern sky. I also pondered what are they doing with HAARP? Oh yes more snow on the way.
This High-frequency Active Auroral Research Program known as HAARP, is a scientific endeavor aimed they claim at studying the properties and behavior of the ionosphere. The Ionosphere stretches roughly 50 to 400 miles above Earth's surface, right at the edge of space. Along with the neutral upper atmosphere, the Ionosphere forms the boundary between Earth's lower atmosphere where we live and breathe and the vacuum of space. HAARP was run by the United States Air Force, now the University of Alaska Fairbanks supposedly operates it. HAARP is the world's most capable high-power, high-frequency transmitter for study of the ionosphere. This Ionospheric research instrument, a high power transmitter facility operates in the high frequency range. The IRI can be used to temporarily excite a limited area of the Ionosphere for scientific study. many of us are convinced that it along with chemtrails are used to mess with our weather. Kind of funny with things like food and fuels in such short supply that they would want us frozen in the states, not really!!! They are trying to kill is with Satans Spit, why not death by winter?
Just my thoughts from Alaska.

Very interesting observations there. One of my many jobs here in Holland was as a concrete inspector for a Norwegian gas-pipe project back in 1990.
48,000 pipes metal pipes had to be covered in a thick layer of concrete to supply gas to Europe. (The pipes were submerged under the sea, hence the need for a concrete layer) Anyway, in 1990 we had a winter like no other in Holland. Temps reached a frigid min 25C (min 13F) The finished pipes were stored outside on the coast. A constant 30 mph bitter north wind blew from the North Sea.
I had to expect them pipes—I have never known cold like it, I could only stay outside for short spells, folks, it was horrendous.
How anyone can even survive min 35F, (min 37C) I can't even imagine, and the experts are saying Americans will have to endure "feel-like" temps of min 70F (min 55C)
I have heard many rumours of HAARP over the years and is real and is used in warfare and is definatly something to ponder, thanks Bill.
What I would like to add is what Hawkeye mentioned in her email, namely the extreme mild temperatures we are experiencing across the pond. The fact is (at the moment anyway) here in Holland and most parts of western Europe winter doesn't happen anymore. It gets gloomy, rainy and colder but—Some years the temp doesn't drop below freezing and snow has become very rare!
Yesterday I told Hawkeye I really didn't know Florida could get so cold. These incredibly cold bouts in the US and the incredibly mild winters on our side of the pond was given to us as a warning as far back as the late '50s. . .
Harry Wexler warned JFK the North Atlantic jet stream would become increassingly erratic, causing wild and unpredictable weather if they kept firing rockets into the atmosphere for space exploration and. . . Climate manipulation research! And now it's here and we are paying the price.