The New Pandemic Tsunami In China Has Everyone Worried: No one is quite sure what is happening: Even the authorities say they don't know what the true numbers are! China’s hardline zero-Covid policy shielded its population until now—surging deaths projected by some studies to be as high as one million, should the West worry? 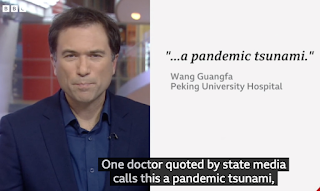 Screengrab from the Ross Atkins report below.

The New Pandemic Tsunami In China Has Everyone Worried: No one is quite sure what is happening: Even the authorities say they don't know what the true numbers are! China’s hardline zero-Covid policy shielded its population until now—surging deaths projected by some studies to be as high as one million. So should the West be worrying and will it come our way once again as it did in early 2020?

For much of the early pandemic, China's hardline zero-Covid policy shielded its population from the kind of mass deaths that haunted Western nations – a contrast repeatedly driven home by the Communist Party to illustrate the supposed superiority of its rule.  images of overflowing hospitals and busy funeral homes from the United States and other western countries featured heavily on China’s state-controlled television, where the deaths of over a million Americans from Covid are depicted as a gross failure of Western democracy.

However, recently the shoe has shifted to the other foot. Here in the west, the recent wave of the mild variant known as Omicron has been less potent due to the natural immunity of so many westerners who had previously been infected with Covid, while the Chinese are suffering an unprecedented wave of infections which has ripped through the country. (Possibly because of the earlier zero tolerance?) The Chinese population has had a couple of billion vaccinations, which have obviously been useless.

Not letting the truth get in the way of a good story!

China's state media is deliberately ignoring scenes of crowded hospital wards and packed crematoriums unfolding at home, while officials insist that by the government’s own count, few people are dying of Covid. One way in which Communism and Democracy work in tandem seamlessly I guess.

But as China abruptly abandoned the strategy of hardline zero-Covid policy, suddenly allowing people to come and go, the prospect of surging deaths – projected by some studies could be as high as one million, the government suddenly appear to be flip-flopping and navel-gazing.

Officially, China reported only eight Covid deaths this month – a strikingly low figure given the rapid spread of the virus and the relatively low vaccine booster rates among the vulnerable elderly. The official tally has been met with disbelief and ridicule online, where posts mourning loved ones dying of Covid abound.

Caixin, a Chinese financial magazine known for its investigative pieces, reported on the deaths of two veteran state media journalists infected with Covid, on days the official toll stood at zero. Other social media posts have described the frustration experienced by many in attempting to obtain a hearse and the difficulty of securing a slot for cremation at a funeral home.

When CNN visited a major crematorium in Beijing on Tuesday, the parking lot was completely packed, with a long line of cars snaking around the cremation area waiting to get in. Smoke billowed constantly from the furnaces, while yellow body bags piled up inside metal containers. Grieving family members waiting in line clutched photos of the deceased. Some told CNN they had been waiting for more than a day to cremate their loved ones, who died after contracting Covid.

One man told CNN the hospital where his friend passed away was too full to keep the body because so many people had died there. His friend’s body was left on the hospital floor, he said. In the nearby shops selling funerary items, a florist said she was running out of stock, and a convenience store owner said business had never been so busy.

In many parts of the country, crematoriums are struggling to keep up with an influx of bodies too, according to social media footage. Outside a Beijing hospital designated for Covid patients, a steady stream of elderly patients in wheelchairs entered the facility when CNN visited on Tuesday. A man outside the hospital said space is running out, and he had to go the night before to register his elderly family member for a bed.

A hazmat-suited worker, who was sorting through yellow bags of medical waste, said he had been working extra hours in the evening to deal with the surge of Covid patients. “There are a lot of old people particularly,” he said. Elderly Covid patients with underlying conditions were dying every day, the worker said.

Counting Covid deaths
Facing growing scepticism that it is downplaying Covid deaths, the Chinese government defended the accuracy of its official tally by revealing it had updated its method of counting fatalities caused by the virus. According to the latest guidelines from the National Health Commission, only those whose death is caused by pneumonia and respiratory failure after contracting the virus are classified as Covid deaths, Wang Guiqiang, a top infectious disease doctor, told a news conference Tuesday.
Those deemed to have died due to another disease or underlying condition, such as in the event of a heart attack, will not be counted as a virus death, even if they were sick with Covid at the time, he said. Commenting on China’s criteria for counting Covid deaths on Wednesday, the World Health Organization’s emergencies chief Michael Ryan said the definition was “quite narrow.” “People who die of Covid die from many different (organ) systems’ failures, given the severity of infection,” Ryan said. “So limiting a diagnosis of death from Covid to someone with a Covid positive test and respiratory failure will very much underestimate the true death toll associated with Covid.”
According to Wang, the Chinese doctor, the change in the definition was necessitated by the mild nature of Omicron, which is different from the Wuhan strain at the start of the pandemic, when most patients died from pneumonia and respiratory failure. But Jin Dongyan, a virologist at the University of Hong Kong, pointed out this is more or less the same strict criteria Chinese authorities have used to tally Covid deaths all along.
The definition was only slightly broadened in April this year to include some Covid patients who died of underlying conditions during the Shanghai lockdown in order to justify the draconian restrictions, Jin said. During Shanghai’s outbreak from March to May, city officials reported 588 Covid deaths from some 600,000 infections. But once the city’s lockdown lifted, the nationwide death toll remained at zero for the next six months, despite the number of infections reaching into the hundreds of thousands.
Then, in late November, Beijing announced three octogenarians had died of underlying conditions with Covid, just as the city ramped up its own Covid restrictions amid a widening outbreak. According to Jin, these inconsistencies reveal China’s method of counting Covid deaths to be “entirely subjective.”
“The death data has been misleading from the start,” he said. Counting deaths from Covid versus deaths with Covid has been a topic of debate worldwide since the start of the pandemic, said Ben Cowling, a professor of epidemiology at the University of Hong Kong. Most countries, including the United States, decided it’s too difficult to evaluate every single death to know whether Covid was a factor and counted deaths with Covid in their official death tolls, Cowling said.
But he pointed out that the debate over how to count Covid deaths would be overshadowed by a bigger issue in China – namely, there is very little PCR testing being done after the government rolled back mass testing. “We know there are many, many Covid deaths already occurring. And those are not being counted with the Chinese method or with the American method, because the testing is not being done,” he said. “The substantial reduction in testing would have a greater effect on the death statistics that we’re going to see in the coming one to two months.”
xx

Deaths up to one million?

Dude! There will be OVER a million deaths just in the US. Just wait.