The West and Russia edge closer toward WWIII: Fears of violence as Russian backed Serbia have “ordered full combat readiness” to defend Serbians in Western backed Kosova—Kosovo remains a potential flashpoint in the Balkans, years after the 1998-99 war! 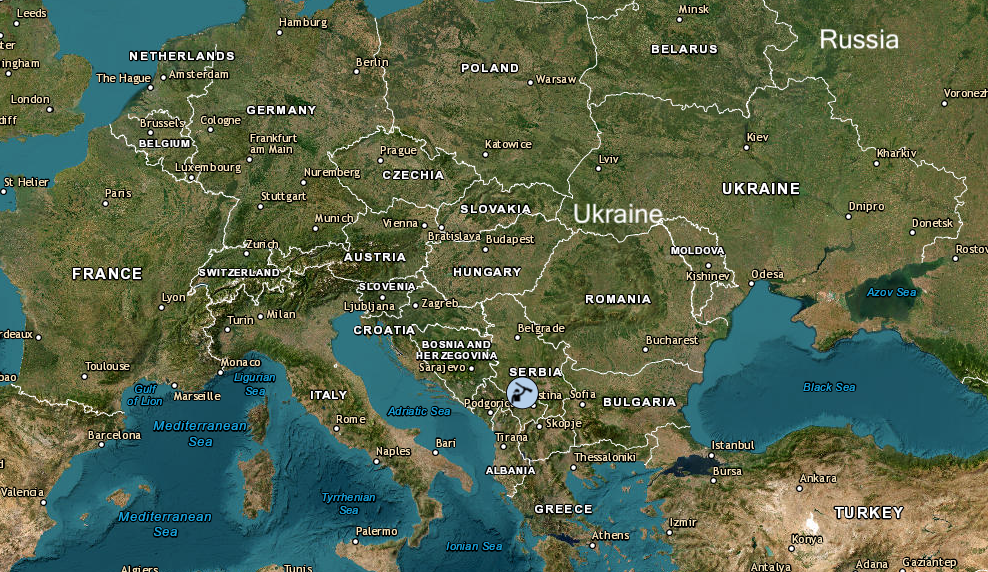 A new war in Europe? Credit RSOE
Tensions in the area go back to the start of WWI and could well be the flash-point to trigger  WWIII.

Serbia has placed its security troops on the border with Kosovo in “the full state of combat readiness”, ignoring Nato’s calls for calm between the two wartime Balkan foes.

Serbia’s interior minister Bratislav Gasic said he “ordered the full combat readiness” of police and other security units, and that they are placed under the command of the army chief of staff according to “their operational plan”.

He said in a statement on Monday that he acted on the orders of Serbian President Aleksandar Vucic so that “all measures be taken to protect the Serbian people in Kosovo”.

It was not immediately clear what this order meant on the ground as Serbian troops have been on alert for a while on the border with Kosovo.

Officials claim alleged harassment of Kosovo Serbs by ethnic Albanians who are a majority in the breakaway province that declared its independence in 2008.

Earlier on Monday, Nato-led peacekeepers said they were investigating a shooting incident in a tense northern region of Kosovo, urging calm as Serbia’s top military officials inspected their troops on the border in a show of combat readiness.

The incident on Sunday evening took place in Zubin Potok, a town where local ethnic Serbs have been manning road barricades for the past two weeks and where tensions have been running high.

The peacekeepers, known as KFOR, said the incident happened near one of their patrols. A statement said no one was injured and “we are working to establish all the facts”.

Serbia’s defence minister and the army’s chief of staff travelled to the border with Kosovo, praising the combat readiness of Serbian troops and their firepower, including howitzers and other military hardware.

Serbia, which has been armed through Russian donations and military purchases, has been sabre-rattling and threatening force against its former province for a long time.

Kosovo remains a potential flashpoint in the Balkans, years after the 1998-99 war that ended with Nato intervention.

Serbia does not recognise the 2008 declaration of independence of its former province, while Western efforts to mediate a solution so far have failed.

Fears of violence have soared since the start of Russia’s war in Ukraine.

The United States and most European Union countries have recognised Kosovo’s independence, while Serbia has relied on Russia and China in its bid to maintain a claim on the province.

Most recently, ethnic Serbs in the north put up roadblocks in protest of an arrest of a former Serb police officer.

Serbs in the north previously had walked out of Kosovo’s institutions, claiming harassment by Kosovo authorities.

Belgrade repeatedly has warned it would protect local Serbs “with all means” if they are attacked.

I fought in the Jewish Rape of Yugoslavia War in the 90s! What the Jews called "The Bosnia War"!
AGAINST the NATO Nazis!
I'd love to do a sequel to that, so I'm hoping for another war!
GO SERBIA!
DEATH TO JEWISH NAZISM!

Dear Gary,
As I observe the Earth reeling, the Sun tossing out destruction towards Earth, food supplies crumbling, winter kicking keister and shortage of fuel to stay warm, china about to launch its next round of paid for by America, "lets kill you off and you have to take your needed Satan's Spit", and lets start World War III and nuke each other, this comes to my mind.
We are in the year Hebrew 5783. It started on Rosh Hashanah, the 1 of Tishrei. When you take the number 5783 on the Hebrew Calendar and add the numbers together, you come up with the number 23. In Hebrew, the number 23 means "Death!" it would sure seem to me that this has started and 2023 will be a year that makes what we have seen so far look just like nothing.
And please remember that when you sound the shofar as a Watchman on the wall, it will, by nature, cause a disturbance. But when yo do those who will awake, will awaken! And those who will be saved will be saved! So stand at your post my Brother, I hear your Shofar blowing clean over to Alaska.

love you, just me listening in Alaska as long as I am alive!

It's going to be a hell of a year my dear brother!

still having problems since w.w.1