Heads Up! 3% of all egg-laying chickens have died or been killed and nearly 20 million birds in total dead in the US due to the highly pathogenic Avian Influenza (HPAI) Something the CDC failed to mention in their report avian influenza has crossed over to humans in other parts of the world recently. 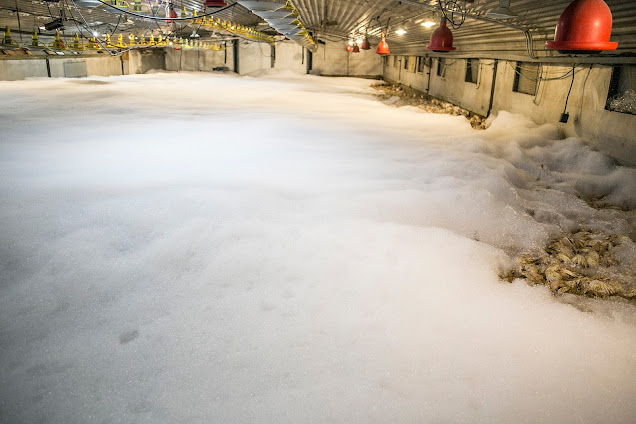 Left—Culling sick birds with foam suffocation, credit Wikipedia.
With the war in Ukraine along with other disasters such as Covid-19 taking up much of the media it may come as a shock to many of you that at the moment the US is having another health crisis—Bird, or avian flue. More than 3% of the country's egg-laying chickens have died or been culled due to the fast-spreading disease—A total of nearly 20 million birds have died due to the highly pathogenic Avian Influenza (HPAI) which began earlier this year. The supply crisis due to feed shortages caused by the Russian invasion of Ukraine is expected to increase the supply shortages, which will push-up prices even higher.
The Centers for Disease Control and Prevention said the cases in birds do not present an immediate public health concern. No human cases of the avian influenza virus have been detected in the United States, however, and, something the CDC failed to mention in their report avian influenza has crossed over to humans in other parts of the planet recently.
Novel bird flu has been detected in seven workers of a poultry farm in southern Russia, Head of the Federal Service for Surveillance on Consumer Rights Protection and Human Wellbeing Anna Popova said at a briefing in February last year."Scientists of the Vector Center isolated the genetic material of this kind of bird flu in seven workers of a poultry farm in the south of the Russian Federation, where an outbreak in bird population was recorded in December 2020," she said. The top sanitary doctor added that this was the first confirmed case of the infection of humans with the A(H5N8) bird flu virus worldwide. According to her, all measures for the protection of humans and animals were implemented shortly, all risks were minimised and the situation did not develop further."
The Vector Center of the Federal Service for Surveillance on Consumer Rights Protection and Human Wellbeing has already added to the international GISAID database the data of whole-genome sequencing of the (H5N8) virus with those mutations that allowed it to cross the interspecies barrier. 239 human cases of H5N1 bird flu have been reported in China and Southeast Asia since 2003, killing 134 people. More recently, two people in China were infected with H5N6 bird flu in January, resulting in the death of a three-year-old girl. The World Health Organization (WHO) reported one new case of human infection with avian influenza A(H9N2) virus in China during the first week of 2021. The case was a 1-year-and 4-month-old male from Yunfu, Guangdong Province, China, who had exposure to domestic poultry prior to the onset of illness. He developed mild symptoms on 28 December 2020 and was admitted to a hospital on 29 December. As of 4 January 2021, no family cluster was reported.

First human cases of H5N8 bird flu: Novel bird flu has mutated in seven workers of a poultry farm in southern Russia: It's the first confirmed case of the infection of humans with the A(H5N8) bird flu virus worldwide.

Bullshit! Sorry to begin so angrily but this bird flu BS is just as untrue as the covid BS is.
First of all pathogens do NOT jump spieces. There is zero proof of it just like covid. This is though one huge reason why we are facing food shortages. "IF" if if there is some illness effecting livestock birds it is most likely from poison of some kind and of which there are numerous amounts of out there to choose from.
Commercial agriculture, which this news is about, feeds livestock of all kinds GMO feed, injects them with antibiotics/vaccines/growth hormones, and God knows what else! There is your "bird flu". Not some phoney pathogen, not some contagious disease (disease is NOT contagious), genetically modified animal feed is top of the list a most likely cause, if the birds are really sick.
If you use your thinking cap regarding this bird flu lie you can think forward to another path this BS takes us on which is the do it yourself backyard farm your own food plan of survival tactics. You raise chickens? Ducks? Geese? Any bird for food or to help your garden fertilizer needs? Not in this world you won't. They will say your birds must die or we will all catch bird flu and die. I say this as serious and firmly as it sounds.
Cows are another target too. Same feed and poison injections but they are farting too much folks so we have to kill them too and or find an alternative "like" food source. Beyond meat! In grocery stores already, be careful! Read all fine print! Synthetic food made in a lab from cells of real God creations but altered and f*%#ed with for your poison dining experience! No kidding. Fake meat. The cows are being blamed for these extreme methane readings (farts!) and it is as absurd as the bird flu is.
Be careful they are hitting our minds very hard with massive amounts of lies now because climate collapse is on the horizon. That is what is really wrong. Not one darn news organization no matter how bona fide they appear says this, but this is what everything is all about.
Our planet is seriously melting down. If anyone would bother to fact check me it is there to see....called proof! I have been tracking with hand written records, the methane releases in play on and off for a few years. Today it is extremely concerning to say the least. Levels no life forms ever in history has lived with.
According to global government sites that are powered by satellites monitoring earth's climate etc., 1600 ppb (parts per billion) is normal methane readings. We are consistently seeing a daily average of 1918 ppb per day globally with several pockets that have gone as high as 2400 ppb! Incredible amounts that are still rising and being emitted. Go search methane poisoning for symptoms. Go look at these sites, do your homework! Save the wildlife, don't kill it, don't fear it, help it!

Is it really Avian Flu or is Avian flu just the ruse to detract us from the 5G cause of the sick birds.

Reply to Anonymous...
You're catching on brother! As I said there are "several" poisons that are upon us to date, including 5g yes. What seems most logical to me is depleted immune systems of all life forms is either causing diseases (called virus) and or is why another toxin was able to "infect" and cause sickness.

One poison works on knocking your immune system down,while the others then are able to get in and cause illness or even death. Vaccines are a huge part of the equation. When you inject toxins (vaccines) you bypass all the body's armor, the armor being the filters of our bodies that work to water down and or block bad stuff from doing cellular damage after contact with a toxin normally or un-injected. I.e., if you breath it your nose is the filter. If you eat it your internal system that breaks food down is the filter, etc etc. So inject directly into muscle which is actually where blood vessels reside, is as bad as putting it right into your veins! No filter!
Here in FL we went full 5g on April 1st, a few days ago. So all these "viruses " will no doubt continue and continue to get worse on weakened bodies. But my friends, "if these days were not shortened, no flesh would survive".
We can only be so healthy in today's world because the attack on immune systems is much too great. No one is 100% healthy anymore. Everyone has some health issue beit minor or major it exists and that right there is the world's proof that the environment is toxic but dull brains do not seem to notice.

People have been conditioned to think sickness is a given, normal. That is what the brainwashing has accomplished. The truth however is that it is NOT normal or a given!
CAUSE & EFFECT. There must be a cause. So, even if this bird flu was real, what is the cause!!!??? All that is ever said is its contagious and it's got to be removed (killed). Same for covid. A monkey caused it on us humans....but how did the monkey get it? No answers. Besides there is no monkey threat to humans because pathogens do not cross spieces! They are liars and it's the excuse to not tell people the poison truth.

So of course and a big unfortunately, our wildlife is too very effected and many times before humans get sick or worse then humans, as they are more vulnerable to the poison being smaller then we are.
Yes, avian flu is just the ruse to detract us from the 5g cause of sick birds, the chemical sprayed atmosphere we all breath, the methane gas earth is now spewing out, the gmo food, the poison waters, the vaccines, the radioactive soils, ..... are you getting it yet!?
News today....get your 4th booster.
They are lost souls, can't help them anymore. Help yourselves. Know truth.