What comes out of the ocean is an indication as to the health of what's in the ocean... The lower western coast of Africa, which was once a paradise is spewing up thousands of emancipated and dead seals along with tens of thousands of dead birds leaving experts stumped

Authorities in the Western Cape are worried about the alarming number of seal deaths recently. Nearly two hundred animals were buried on Tuesday, 9 November and hundreds more reportedly died over the past weekend but actually, the situation is much much worse than the official narrative, someone didn't do their homework or they just don't want us to know the true story!

There is a famous phrase: what comes out of the ocean is an indication as to the health of what's in the ocean... The western coast of Africa, which was once a paradise is now showing signs of collapse.

The Western Cape MEC of Local Government, Environmental Affairs and Development Planning, Anton Bredell, said the provincial government is investigating the seal deaths – the first reports of the higher than normal mortality rate emerged in September, according to the Mail and Guardian when malnourished-looking cape fur Seals washed ashore in Paternoster, Shelly Beach, and Elands Bay.
Bredell said the department has ruled out the possibility that the seal deaths could be linked to avian influenza. However, the official report on the matter is only expected later this week. The early investigation leads the authorities to believe malnutrition is the reason for the high mortality, said Bredell on Tuesday.
“The dying seals are not linked to the avian influenza outbreak. Rather it appears that the seals are dying due to malnutrition. “The situation is still being investigated. In addition, we are urging the public not to feed any seals despite the concerns about malnutrition,” said Bredell.
Bredell’s department said 144 seals were buried at Laaiplek and Dwarskersbos and another 50 at Elandsbaai on Tuesday, 9 November, according to News24. Dr. Tess Gridley, the co-director of Sea Search Rescue and Conversation, told SABC News that the non-governmental organization also suspects that seal death could be linked to malnutrition.
“So, we could suspect malnutrition because they are thin, but it’s not clear yet! We have sent samples to the lab and we will wait three months. “Samples were sent to check whether its avian flu and results came back and they were cleared from that.
Sometimes it’s easy for people to get to the shoreline and see dead birds and seals and want to link the two together,” said Gridley. The State Veterinary Service is preparing the report that the provincial government is awaiting. While seal deaths at this time of year can be expected, it is unusual to see them die at this rate – the Sea Search NGO says that hundreds of the animals died over the weekend.
In October 2020 another seal die-0ff was reported just a few hundred miles north along the Namibia western coast: The beach at Pelican Point in Namibia was home to more than 10,000 dead baby seals, according to the Ocean Conservation Namibia (OCN). Drone footage taken by the OCN shows the beach full of seal pup bodies. "We are sitting at the cusp of a catastrophe. There are literally thousands of seal pups being born prematurely and dying almost immediately," OCN said. 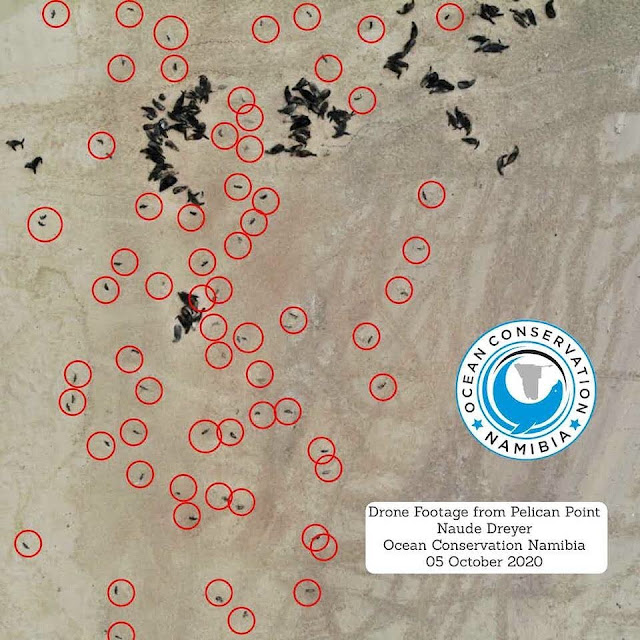 Premature seal pups cannot survive. They are too young and not fully developed. A few premature deaths are a natural event, but thousands of premature dead seal pups are extremely rare. The beaches are full of little black lumps, OCN said.

The number of dead seals found washed ashore on the coast of Namibia has risen to more than 7,000, non-profit group Ocean Conservation Namibia (OCN) said on Friday. OCN said last week thousands of dead seal pups had washed ashore at Pelican Point peninsula, a tourist destination known for its colony of seals and school of dolphins.
Naude Dreyer, a marine biologist at OCN, said investigations in the past week had revealed a spike in the number of dead female adults. “What we have been observing is less freshly dead seal pups and a lot of dead female adults,” he said. Investigations had mainly centered on the Pelican Point Beach, so the overall number of dead seals could be higher.
The Ministry of Fisheries and Marine Resources said last week it would send samples to South Africa to determine the cause of death. Dreyer said this had not yet been done because of the need to observe strict guidelines on shipping dangerous animal products. OCN said last week starvation was the most probable cause as fish, the seals’ main source of food, have moved from Pelican Point, but other reasons could be toxins or disease and nothing could be ruled out without a full study.
Up to a million dead birds?
The Western Cape Disaster Management Centre continues to manage an ongoing outbreak of Avian Influenza amongst wild seabirds in the province.
Since 1 October 2021, the total number of recorded dead birds is 18388 (many thousand more will have died out at sea, added by TBW) of which 17926 are Cape Cormorants. The area most affected is Dyer island where 12203 dead birds have been reported to date.
The Minister of Local Government, Environmental Affairs and Development Planning, Anton Bredell, says the outbreak is not yet over but the numbers of dying birds continue to decline in most regions.
“We haven’t had any reports of the virus spreading further inland or to other unaffected regions which may suggest that our ongoing interventions have paid off. At the moment we’re losing around 100 birds per day, down from around 750 at the peak of the outbreak.
The bulk of the deaths are reported on Dyer island where 59 Cape Cormorants were found yesterday. At the peak of the outbreak around 500 per day were dying on the island.”
Bredell says efforts will continue to address the ongoing outbreak.
“We hope we’ve turned the corner, but more time is needed to be sure. I want to thank all the various stakeholders and officials who have been working tirelessly for more than a month now on containing and managing this outbreak.”
The public is also urged to continue to be vigilant and report unusual mortalities in any birds to their local municipality, conservation authority, or state veterinarian. The SPCA and NSPCA may also be contacted. Cape Nature