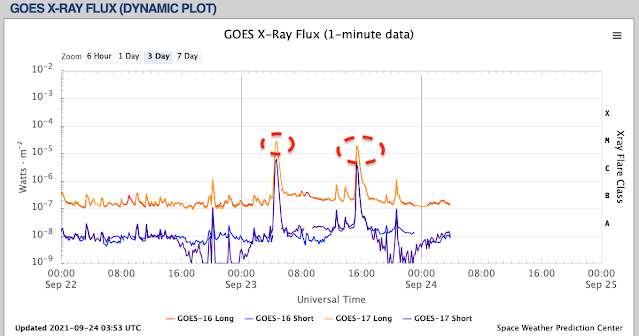 The two flares, a M2 and a M3 hurled CME's into space but are not expected to directly impact Earth's magnetic shield, two glancing blows are expected on Sept 26-27 according to Spaceweather.com.

USAF observatories report Type II and Type IV solar radio bursts in the flare's immediate aftermath. This suggests that a CME was produced as well (because such radio bursts typically come from shock waves in a CME's leading edge).

UPDATE: Newly-arriving coronagraph images from SOHO confirm that the explosion hurled a CME into space. However, the CME is not heading as directly toward Earth as originally suspected. This first-look movie shows a storm cloud traveling mainly to the south and east of our planet. A glancing-blow might be possible on Sept. 26-27. Stay tuned for additional analysis. Solar flare alerts: SMS Text.

September 2021 has been the month which the new solar cycle 25 has really sprung to life. Back in the first week of September our sun exploded with a number of massive sunspots, see diff below.

It has been few years since we have seen sunspots this big on the face of our sun. Big sunspots can produce big flares.

This movie from NASA's Solar Dynamics Observatory showed their development during the first week of September, 2021:

How big were they? The entire planet Jupiter could fit comfortably between the primary cores of AR2868 (on the right). AR2866 (on the left).

The massive sunspots on our sun produced a gust of solar wind which buffeted Earth's magnetic field on Sept. 7th around 1400 UT. The sharp uptick in solar wind speCed was unexpected.